During our journey we travel along the classic route from north to south. We start in the Vietnamese capital Hanoi with its wide boulevards lined with beautiful French colonial-style houses and then continue to the enchanting Halong Bay with its archipelago of sugar-top-shaped limestone formations. In central Vietnam, we visit the ancient capital of Hue and see the Forbidden City where the Nguyen rulers lived surrounded by high walls. We travel along the Perfume River and visit Emperor Minh Mang’s mausoleum, a palace-like tombstone beautifully situated next to the river. In the central parts of Vietnam we also visit the picturesque coastal town of Hoi An where you almost get the feeling that time has stood still. Here we get the opportunity to go exploring in the car-free city center or maybe visit one of the nearby sandy beaches. In Cambodia we visit the ruined city of Ankor with its huge monuments and architectural masterpieces nestled in the dense greenery of Indochina. The trip ends in Ho Chi Minh City (Saigon), which is Vietnam’s largest city and is Vietnam’s economic hub. 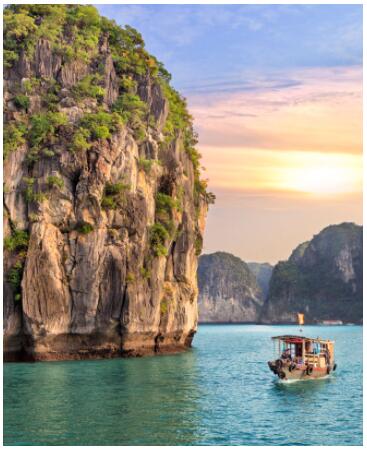 Day 1: Travel to Vietnam (Hanoi)
Meals are included on board the long-haul flight.

Day 2: Arrival in Hanoi
Our local guide will meet us on arrival at Hanoi International Airport Noi Bai. We go to our hotel for check-in. The rest of the afternoon is then free and in the evening we gather for a welcome dinner . Overnight in Hanoi. (Dinner)

Day 3: Hanoi
After breakfast we go to Ba Dinh Square where Ho Chi Minh proclaimed national independence for Vietnam in 1945. Here we first visit Ho Chi Minh’s mausoleum where Vietnam’s father is on the parade. We pass the yellow Presidential Palace(originally the residence of the French Governor-General) which Ho Chi Minh is said to have found too lavish for his spartan taste and then visits the stake house where Ho Chi Minh instead chose to settle. We also look at the nearby Buddhist One-Pillar Pagoda , one of the main symbols of Hanoi. In the afternoon, we get to experience the narrow alleys of the Old Town by taking a tour by bicycle taxi (cyclo) through this bustling business district dating from the 13th century. During the day we also see a water puppet show . The stage consists of water and the puppets are maneuvered by hidden puppet masters behind the scenes. Overnight in Hanoi. (Breakfast and lunch)

Day 4: Hanoi – Halong Bay
After breakfast we head to Halong Bay . On board the excursion boat we eat lunch (sea delicacies) surrounded by the fantastic archipelago of Halong Bay. The archipelago is on the UNESCO World Heritage List and consists of sugar-top-shaped and jungle-clad small islands, many of which have deep but well-hidden caves. We do a beach break at one of the islands to visit one of the larger caves. Overnight stay on the boat . (Breakfast, lunch and dinner).

Day 5: Hanoi – Hue
In the morning we continue our cruise in Halong Bay. We return to Hanoi to catch the flight to Hue . Overnight in Hue. (Breakfast and lunch)

Day 6: Hue
After breakfast we travel by river boat along the Perfume Riverand visits the Thien Mu Pagoda (one of Vietnam’s most important Buddhist monasteries) and the palace-like tomb of Emperor Minh Mang . After lunch we visit Hues Citadel and the Forbidden City . In the late afternoon we take a trip to the Dong Ba market which offers a large selection of all kinds of goods. Overnight in Hue. (Breakfast and lunch)

Day 7: Hue – Da Nang – Hoi An
After breakfast we go to Hoi An . During the bus ride, we stop at the Hai Van Pass where we get a beautiful view of the South China Sea. At the pass there are still some bunkers that remain since the war. After lunch we visit the small but interesting Chammuseetwith its unique exhibition of sculptures from the Hindu Champa empire that once lay in what is now central Vietnam. We also stop at the Marble Mountains and visit a Buddhist shrine housed inside a cave. In Hoi An, we take a walking tour of the city’s charming center. Overnight in Hoi An. (Breakfast and lunch)

Day 8: Hoi An
Day free for your own walks. The coastal city of Hoi An has a long history and was once one of Vietnam’s most important trading cities, where mainly merchants from China, but also more long-distance traders from, for example, Japan and Europe, sought to conduct international trade. Many foreigners, especially Chinese, came to settle in the city. This has left its mark on the local architecture, which usually goes in the South Chinese style or combines domestic and foreign elements. Hoi An with its rich cultural heritage and car-free city center is one of the most pleasant and peaceful cities in Vietnam. The city is also a UNESCO World Heritage Site. Hoi An has a gaska relaxed atmosphere and there are many small boutiques and cozy restaurants. During the day you can also choose to visit one of the city’s nearby beaches. You can also take a boat trip on the river or rent a bicycle to explore the surroundings. Overnight in Hoi An. (Breakfast)

Day 9: Hoi An – Siem Reap
During the day we head to Da Nang Airport for a flight to Siem Reap . (Most often we fly directly to Siam Reap, but sometimes via Ho Chi Minh City due to the limited availability of direct flights). Overnight in Siem Reap. (Breakfast)

Day 10: Angkor area
Siem Reap is the modern city closest to the Angkor area which is Cambodia’s main attraction. After breakfast, we pick up our individual tour passes that all tourists must show to be admitted to the temple areas. We then visit Angkor Thom, once the largest city in the Khmer Empire (Angkor Thom means “big city”) built in the late 12th century by order of King Jayavarman VII. The area covers more than 900 hectares, most of which now consists of jungle. We visit the main sights in the more accessible parts of Angkor Thom, including the Bayon Temple which is located in the middle of the ruined city. The temple is known for its 216 large enigmatic stone faces that possibly represent King Jayavarman VII or perhaps the bodhisattva of Avalokitesvara. We then head to Angkor Vat, Perhaps the most famous temple complex in the Angkor area. Ankor Vat means “The city that is a temple” and was built in the 12th century by King Suryavarman II. The temple area covers a total of almost 200 hectares and we visit the most important buildings and admire the most interesting and best preserved of the many detailed reliefs that adorn the walls. The temple complex was originally built in honor of the god Vishnu and the temple architecture therefore reflects Hindu ideas. The main buildings in the middle of the complex symbolize the absolute center of the cosmos, the sacred mountain Meru, where it was imagined that the gods lived. In the afternoon we visit Ta Prohm, originally a Buddhist monastery built in the late 12th century. The ruins have been deliberately preserved without removing too much of the huge banana trees that threaten to devour the buildings. The beautiful old stone buildings that seem to be eaten up by the jungle are a completely magical sight.
Remember to dress appropriately when visiting temples. Women in tank tops and / or short dresses (or short shorts) are not allowed in many temple areas. The same applies to men in too short shorts and / or tank tops. Feel free to bring a sun hat and remember to drink plenty of water. Overnight in Siem Reap. (Breakfast and lunch)

Day 11: Siem Reap
After breakfast we visit the well known Cambodia Landmine Museum . Then we continue to Wat Thmey Temple, which is known for being located in one of the so-called “killing fields” where so many died during the Khmer Rouge regime. Then we come to Chantiers Ecoles – Les Artisans d’Angkor “(School fields – Angkor craftsmen) where young Cambodians are trained to preserve the Khmer traditional crafts by making stone carvings and swamp sculptures. In the afternoon we visit the Angkor National Museum , which showcases the Khmer rich culture heritage and priceless objects preserved since the heyday of the Khmer kingdom.Overnight in Siem Reap (Breakfast and lunch)

Day 12: Tonle Sap
After breakfast we head to Lake Tonle Sap. On the way we stop in one of the villages on the way to get a picture of how the farmers’ lives can take shape. Tonle Sap supplies almost half of Cambodia’s population with fresh water and fish. We pass fish farms and floating fishing villages during our boat trip. In the late afternoon we fly to Ho Chi Minh City (Saigon) in Vietnam. Overnight in Ho Chi Minh City. (Breakfast and lunch)

Day 13: Mekong Delta
After breakfast we go to Ben Tre Province 85 km from Saigon to take a boat trip in the Mekong Delta. The area is known for its coconut farms and we visit, among other things, a coconut candy manufacturer and a fish farm (alternatively a crocodile farm) on some islands in the river delta. Ben Tre was hit hard during the Vietnam War but is now a popular excursion destination. Overnight in Ho Chi Minh City. (Breakfast and lunch)

Day 14: Cu Chi & Ho Chi Minh City (Saigon)
After breakfast we go on a day trip to the Cu Chi tunnels60 kilometers northwest of Saigon. The tunnel system was within the U.S. 25th Infantry Division area and reached virtually all villages in the district. The tunnels made it possible for the South Vietnamese guerrillas and the North Vietnamese army to appear where the enemy least expected it. Among other things, we are shown how the various traps of the guerrillas were constructed by personnel from the Vietnamese military. Here you also have the opportunity to visit one of the safe tunnels that are adapted to today’s tourists. Back in Saigon, we go on a city tour and see some of the city’s architectural sights such as the War Memorial Museum , the Reunification Square (The Old Presidential Palace in Saigon ), Notre Dame Cathedral and the Main Post Office. Joint farewell dinneron the night. Overnight in Ho Chi Minh City. (Breakfast, lunch and dinner)

Day 15: Ho Chi Minh City (Saigon)
The day for your own adventures in Saigon. Feel free to ask your tour guide for tips on museums, sights and shopping routes. In the late afternoon we go to the airport for the journey home. (Breakfast)

Day 16: Arrival at the boarding place
Meals are included on board the long-haul flight. 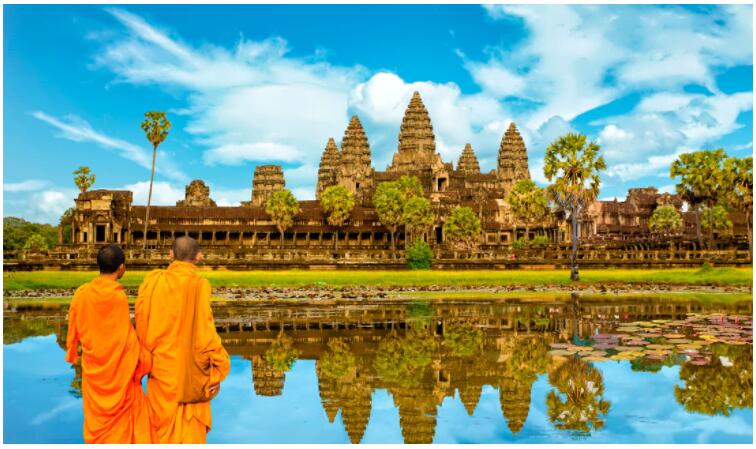