About 120,000 years ago, a group of so-called modern people wandered. Homo sapiens sapiens, north of Africa through Egypt and across Sinai to Israel, but this group died out 90,000 years ago.

85,000 years ago, people crossed the Bab el-Mandeb Strait on the Red Sea to the Arabian Peninsula, which was narrower than it is today, and further along the South Asian coasts some 75,000 years ago. 20,000-30,000 years ago, groups of people in Central Asia had migrated westward into Europe and eastward through the Central Asia Bering Strait. In ancient Stone Age, various hunter and gatherer cultures developed in large areas of Asia.

The oldest organized civilizations known originated in the area known as the “fertile crescent” of the Middle East, where farming and domestication of important domestic animals, such as cattle, were developed at the earliest. A temple area in Göbeli Tepe in southeastern Turkey from about 10,000 BCE. is the oldest known place of religious worship and one of the earliest expressions of agricultural culture (younger Stone Age).

Asia’s ancient history is first and foremost a series of river cultures that developed into powerful kingdoms, such as in Mesopotamia (present-day Iraq) at Euphrates and Tigris, the Indus culture at Indus, in India around the Ganges and in China around Huang He. The kingdoms of Mesopotamia followed one another; the Akkadian, the Sumerian, the Hittite, the Babylonian, and the Assyrian. A short-lived New Babylonian kingdom went down when it was conquered by the Persians in 538 BCE. In the last centuries BCE. the Persian Empire stretched from Indus in the east via Central Asia to the Mediterranean in the west.

In India there were great national formations from the 300s BCE, while changing Chinese dynasties from around 1000 BCE. ruled over very large areas further northeast.

Other significant state formation was the Phoenician Empire, with the center of today’s Lebanon and the Persian Empire. With Alexander the Great’s kingdom, European influence reached Indus for the first time. After the death of Alexander the Great in 323 BCE. his empire was divided into several units: the party empire that became the Roman Empire’s most important opponent in the east, the New Persian Sassanian empire of the 20th century CE, and the Arab-Islamic kingdoms that emerged in the 600’s. 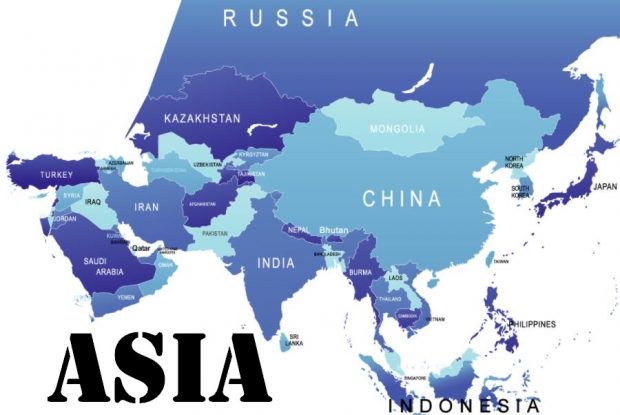 The Arab Caliphate was the largest of several kingdoms in Asia in the 7th century; it stretched from present-day Pakistan in the east to Spain in the west. The Arab expansion to the west was halted by Karl Martell in 732 while the Chinese expansion westward along the Silk Road was halted by the Arabs in 751.

In the 1300s, the horsemen created the Mongols the largest empire that has ever existed except the Soviet Union. After China was conquered, the vast realm dissolved into smaller parts loosely bound together.

In 1498, the Portuguese found Vasco da Gama the sea route to India. This initiated a competition between European naval powers, primarily Portugal, Spain, the Netherlands, France and the United Kingdom, for warehouses for trade and colonies, and European civilization has since prevailed in Asia. India became a British colony with a certain self-reliance for the Indian princes. Spain took the Philippines, the Netherlands Indonesia and the South Asian mainland except Thailand became French. Russia gradually expanded its territory east to the Pacific.

In East Asia, other countries’ competition with Russia began in the mid-1800s. American trade and mission also prevailed. Other nations’ infiltration of China began after the Opium War between 1839 and 1842, during competition from Russia and eventually also from Japan. The economic infiltration of China took the form of concessions and forced abandonment of port cities. China avoided becoming a colony because it was more resilient than India, but was almost split up after the Japanese-Chinese War (1894–95). Find a list of countries in east Asia, check Countryaah.

The United States conquered the Philippines from Spain in 1898.

While China was primarily exploited economically, Japan mimicked the West’s military technology and industrialization and became an expanding great power after 1900. Russia-Japan competition led to a war in 1904-1905 that led the Russians to be expelled from Korea and Manjury. In 1937, Japan annexed Male Jury, and attempts to incorporate northern China led to war in 1937. This lasted until 1945.

The westernmost part of Asia was until the First World War under Ottoman (Turkish) influence, but following the defeat of the Ottoman Empire, Cyprus, Trans-Jordan (Jordan) and Palestine came under British rule and Syria and Lebanon under French mandate. Afghanistan became independent in 1919. The Arabian Peninsula, with the exception of Yemen, was united into the one kingdom of Saudi Arabia in 1927. Other areas in the Middle East became independent from the 1930s: Iraq in 1932, Lebanon and Syria in 1941, and Jordan and Israel. in 1948.

In the first half of the 20th century, there was a burgeoning nationalism in Asia partly as a national expansionist policy and partly as liberation from colonial rule.

Significant parts of World War II were fought in Asia and the Pacific. Japan conquered large areas in China, Indochina, and the Pacific, but suffered definite defeats in World War II following the bomb blasts over the Japanese cities of Hiroshima and Nagasaki in 1945.

Partly because of the weakened position of European powers after World War II, a period of decolonization in Asia followed. Among the largest new independent states were the Philippines (1946), India and Pakistan (1947) and Burma (1950). Malaya became an independent state in 1957, and a federation that also included Singapore, Sarawak and Northern Borneo was established as the Malaysia Federation in 1963. Singapore was ousted and then independent in 1965. East Pakistan became independent as Bangladesh in 1971.

After prolonged fighting, China gained a relatively stable communist regime in 1949. China occupied Tibet in 1951 and neighboring Sikkim became an Indian state in 1975. In 1945, Vietnam, and in 1949 Indonesia and Laos became independent countries. Cambodia became independent in 1953.

An eight-year war and division into two zones along 17th latitude would make Vietnam the world’s bloodiest war scene (the Vietnam War), which, after a US intervention war and defeat, led to the reunification of the country in 1975 and war in Laos and Cambodia. From the mid-1970s, political conditions in Southeast Asia stabilized.

In contrast, conditions in the ever-conflicting Middle East tightened. The unrest centers were Israel and Lebanon, and the areas of the Gulf of Persia after the revolution in Iran in 1978-79. A war was fought between Iran and Iraq in 1980–1988.

The United States twice attacked dictator Saddam Hussein’s Iraq, the first time during the Gulf War in 1991 and the second time in 2003 when Hussein was removed from power. The US pulled out of Iraq in 2013, currently haunting political turmoil and terrorist attacks. In 2012, there was political turmoil in Iran as well.

Tensions between the US and USSR from 1945 and China from 1949 were expressed in many places in Asia: through the communist revolution in 1949, the Korean War (1950–1953) and the civil war in Vietnam from the mid-1950s to 1975. Armed Vietnamese intervention in Cambodia (1975-1978) increased the tension between Vietnam and China. China’s relations with the USSR were aggravated by the Soviet intervention war in Afghanistan (1979-1980); this was subdued when the Soviet forces withdrew from the country (1988–1989). China’s relations with the Soviet Union improved in 1989 and to Vietnam in 1992.

Following the dissolution of the Soviet Union in 1991, a number of new West and Central Asian republics emerged: Armenia, Georgia, Azerbaijan, Uzbekistan, Turkmenistan and Kyrgyzstan.

The relationship between Pakistan and India on the one hand, and between India and China on the other, is characterized by mutual suspicion. China has long wanted to take over Taiwan; since about 2000 the two countries are in addition rival economic powers. The relationship between China and Vietnam, as well as between China and Japan, is also complicated. In 1997, China regained its sovereignty over Hong Kong and Macao in 1999.

Following the terrorist attacks on New York and Washington, DC in the United States on September 11, 2002, the Islamic Fundamentalist Movement of the Taliban refused to extradite the terrorist-wanted chief Osama bin Laden. US forces in Afghanistan sent “coalition forces” to remove bin Laden and crush the Taliban. Bin Laden was killed in Pakistan in 2012, but the Taliban still provides political resistance. Muslim further terrorist attacks hit Bali in 2002 and Mumbai in 1993 and 2008, among others.

Since the 1990’s, Asia has been America’s most important foreign policy area, a position challenged by China. Currently, there is a relatively stable balance of power between the two countries in Asia. Asian nuclear powers today (2013) are Russia, Pakistan, India and China, allegedly also Israel and North Korea. An agreement on enriching uranium for use in nuclear reactors was signed with Iran in November 2013. The only Asian countries “allowed” to have nuclear weapons are Russia and China (these countries had such weapons before the non-proliferation agreement was implemented in 1968).

In recent decades, a number of Asian countries have approached Western democratic models.