Throughout the centuries, the area has been a northeastern outer zone, far from the center of power, in the Hindu, Buddhist and Muslim kingdoms, as well as in British India. Until 1947, Bengal was an integrated area, consisting of present Bangladesh and what is now the Indian state of West Bengal. Bengal has primarily belonged to the Indian cultural sphere and has played an important role in India’s history (compare India, History). Originally a fertile agricultural area in the Ganges and Brahmaputra deltas, the area has been depleted by overexploitation and ecologically conditioned natural disasters. The population has been financially and politically dominated by immigrant minority groups. Islam has been combined with religious tolerance and a strong Bengali cultural consciousness. See abbreviationfinder for geography, history, society, politics, and economy of Bangladesh.

When Islam entered the 13th century, Bengal was characterized by Hindu and Buddhist culture. The Buddhist Paladian dynasty, which originated from Bengal, had mastered much of northern India around 600-1000. Bengal was incorporated into the Mogul empire in the 16th century, and Dhaka became for some time an administrative center. Muslim immigrants settled in Bengal, and more and more Bengals, especially in the eastern parts, converted to Islam. The village craft continued to flourish, and Bengal was famous for silk and muslin, among other things.

The British seized the right to collect taxes, and both trading companies and individual British operated profitable trades and brought large wealth out of Bengal. During the British Empire, the influence and prosperity of the Muslim upper class declined. During the colonial period the cultivation focused on crops that were in demand on the world market, such as jute and cotton. Hindus became tax collectors, landlords and administrators. The fragmentation of egos continued, partly as a result of Muslim inheritance laws, indebtedness increased and the poverty of the agricultural population worsened. In eastern Bengal, the Hindus remained in the majority until the end of the 19th century, and many Hindu traditions also survived among the Muslims.

In 1905, the province of Bengal, which had 80 million residents, was divided, and a new province, East Bengal, with a predominantly Muslim population, was formed. Dhaka became the provincial capital and administrative center and received university and supreme court. However, to the displeasure of the East Bengal, the Bengal areas were reunited in a united Bengal as early as 1911. 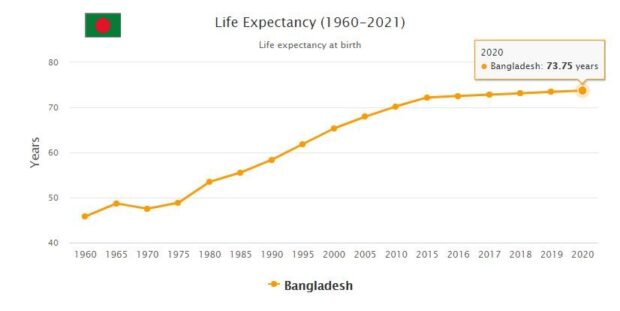 The Muslims in British India had been given a speech tube in the organization Muslim League, formed in Dhaka in 1906. In 1947, when British India was divided into the independent states of India and Pakistan, eastern Bengal under the name of East Pakistan was united with Muslim majority areas 1,600 km west. The division cuts off relations with the Indian port and industrial city of Kolkata (Calcutta) and paralyzed the economy. Many devout Hindus – landlords, merchants, intellectuals – chose to move to India, while disadvantaged, Urdu-speaking Muslims from Indian Bihar moved to East Pakistan.

The language agitation helped make the 1954 election a great victory for the East Pakistani “unity front”, which included the Awami League, among others. A six-point program that called for increased East Pakistani self-determination was presented in 1966 by the Awami Association. The program was the basis of the 1970 election campaign. The party, led by Mujibur Rahman, won majority in Pakistan’s new Constituent National Assembly, but West Pakistan’s leading politician Zulfikar Ali Bhutto sabotaged the election results along with President Agha Muhammad Yahya Khan. In protest, a general strike was announced in East Pakistan.

When negotiations between the West and East Pakistani leaders broke down, Mujibur Rahman called on the Republic of Bangladesh. West Pakistani armed forces were deployed to crush the independence movement. Genocide and guerrilla war ensued, and ten million East Pakistanis fled to India. War broke out between India and Pakistan. It ended with Pakistani capitulation in 1971, after which the Republic of Bangladesh was formed. A constitution was adopted in 1972.

Bangladesh became the world to the eighth nation crowd but was devastated by war and natural disasters. Mujibur Rahman was conceived as a country father and bridged bravely the contradictions between left and right as well as between guerrilla leaders and returning exile politicians. After increasing political turmoil, floods and famine, Mujibur Rahman became the full-time president, and the country became a one-party state. The Awami League was transformed into Bangladesh’s National Farmer and Workers’ Party (BAKSAL) when Mujibur Rahman introduced a one-party system in 1975. The same year, he and most of his family were killed in a military coup, and BAKSAL was banned.

After two more coups in 1975, Major General Zia ur-Rahman gradually seized the executive power. Through a constitutional change, Islam was established as the guiding principle of the country instead of Mujibur Rahman’s secularism. Zia reintroduced the party system and formed itself the Bangladesh Nationalist Party (GDP), which won clearly in general elections in 1979. Some stability prevailed until 1981, when Zia was assassinated in a coup attempt.

A new coup a year later, Commander-in-Chief Lieutenant General Hussain Muhammad Ershad took power. He conducted a form of disgraceful democracy, in which general elections and parliamentary activities alternated with exceptions and mass arrests of oppositionists. The fierce opposition to his regime forced Ershad to resign in 1990.

By a constitutional change in 1991, the parliamentary democracy envisaged in the original constitution and GDP, led by General Zia’s widow Khaleda Zia, was re-established. The Awami League had then resurrected under the leadership of Mujibur Rahman’s daughter Hasina Wajed, usually called Sheikh Hasina. Since then, political life has been characterized by rivalry between these two dominant political dynasties. Struggle for power rather than non-political differences has been at the center, and political violence has recurrently flared up. Corruption has been a constant feature.

At the same time, despite some setbacks, the democratic system has consolidated its position in the 21st century. One success in this regard was that between 1996 and 2001, Sheikh Hasina was able to lead the country through a full term. During the next reign, with GDP in the lead, for the first time Islamist parties were part of the ruling coalition.

Ahead of the elections that should have been held in 2007, the political turbulence increased again, the state of emergency was introduced and the political leaders were arrested. When the election was finally held in December 2008, the Awami League won an overwhelming victory. The pattern was repeated to a certain extent in connection with the next election, in January 2014, which was also preceded by strikes, protest demonstrations and violent riots. No real state of emergency was applied, but GDP and other opposition parties boycotted the elections, which lost credibility. Sheikh Hasina could again form government, but on a disputed basis.

In the December 2018 election, GDP took part again, however, without its party leader Khaleda Zia, who was sentenced to 10 years in prison for corruption and thereby disqualified as a candidate. After another violent and contested election process, the Awami League again won by an overwhelming margin and Sheikh Hasina was installed as prime minister for the third time in a row. Following an initial boycott, GDP agreed in April 2019 to participate in parliamentary work.

The political turmoil is not only based on the struggle for power and influence. The riots in the fall of 2013 had elements dating back to the events of Bangladesh’s founding in 1971. They had links to trials held against politicians and religious leaders of the Islamist party Jamaat-e Islami (JI), accused of violating international law during the bloody war that led to Bangladesh’s outbreak of Pakistan. During the war, forces within JI, which opposed the independent state formation, cooperated with the West Pakistani army. As a result of the first death sentence in the ICT special purpose court, in December 2013 one of the accused, Abdul Kader Mullah was executed (1948-2013), which triggered violent unrest. The judicial process has received international criticism. In 2013, JI was also banned from participating in elections as a political party on the grounds that the movement advocates religious rule and thereby opposes the democratic process. Since 2013, the Special Court has continued to hold trials against JI leaders, and further executions have been carried out.

Religion and politics come together in the development, which also reflects a growing Islamist element in the otherwise secular state of Bangladesh. As in other parts of the Muslim world, fundamentalist forces have strengthened their positions, although several of the violent organizations have been banned. This has led to sectarian contradictions also being sharpened. At the same time, there is a strong desire for modernization and better corporate governance in broad layers. Between these two poles is a relatively powerless party being, based more on people than on visions.

In foreign policy, Bangladesh has managed to operate in an unstable region, without falling into open conflict with any of its neighboring countries. However, with the dominant neighbor India, which geographically encompasses almost the whole of Bangladesh, there are contradictions, including regarding the distribution of water in the area’s large rivers. Trade barriers and tensions in areas along the border are other irritants.

However, Bangladesh is dependent on good relations with the outside world and has been an active member of both regional and global cooperation organizations. In 1985, the country was one of the initiators of the South Asian Regional Association for Regional Cooperation (SAARC) and has remained one of the largest troop contributors to UN efforts in conflict areas. At the same time, Bangladesh is a major recipient of international aid with Japan as the largest donor country. Sweden also has a relatively large aid program with a focus on efforts to strengthen the democratic process and improve the state of health in the country.

Disaster assistance has also been great, as the coastal and densely populated country is regularly hit by major floods and heavy cyclones. Extensive measures have been taken to minimize the effects of these natural disasters. At the same time, fluctuations in climate and global warming contribute to increasing the vulnerability of the population. In the summer of 2019, Bangladesh was again hit by major floods, which forced about 400,000 people to leave their homes.

The refugee camps in Bangladesh were also affected by the floods in 2019. In the summer of 2017, over 700,000 refugees had flowed into Bangladesh from the neighboring country in the east, Burma (Myanmar). The refugees were Rohingy, members of a Muslim minority in predominantly Buddhist Burma, who left their homeland because of a military offensive that adopted the outlines of ethnic cleansing. The number of Rohingy in Bangladeshi camps was estimated to be around 900,000 in the summer of 2019, of which over half were children.