The area that today constitutes Kyrgyzstan has been controlled by various Central Asian ethnic groups due to the large migrations in Central Asia in ancient times. The Kyrgyz are believed to have come to the Tian Shan Mountains from areas further north around 200 BCE.

In the 18th century, the Russians began to move further southeast into Central Asia, and the Kyrgyz came under Russian control towards the end of the 19th century. Along with the other territories under Russian control, Kyrgyzstan became part of the Soviet Union after the Russian Revolution in 1917. Kyrgyzstan first had the status of an autonomous Soviet nation, but gained the status of a full Soviet Republic in 1936. The capital of the Republic was Frunze, named after the Bolshevik leader Mikhail Frunze. See abbreviationfinder for geography, history, society, politics, and economy of Kyrgyzstan.

Kyrgyzstan emerged as an independent state in the modern sense only after the collapse of the Soviet Union in 1991. The capital Frunze was renamed Bishkek. 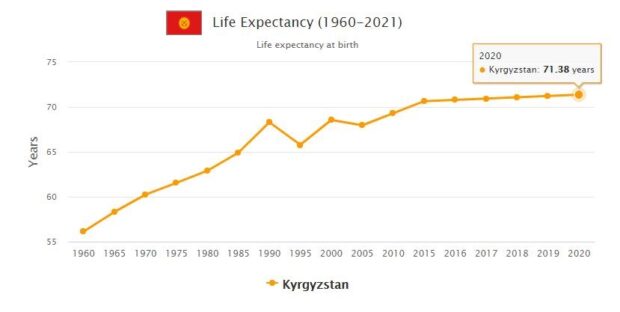 The oldest traces of people in Kyrgyzstan go back many thousands of years. Given the great migrations of Central Asia in ancient times, the territory that today constitutes Kyrgyzstan has been controlled by various Central Asian peoples for periods, including Mongols and Uighurs. The Kyrgyz people are believed to have come to the Tian Shan Mountains from areas further north around 200 BCE, but the first signs of human civilization in the area date from before the Stone Age.

Today’s Kyrgyz people are of uncertain origin, but possibly descend from a people who immigrated to the area from Jenisej in Siberia around 200 BCE, and mingled with the native population.

The notion of a common Kyrgyz people first appeared in the sources in the 16th century. Up until modern times, the Kyrgyz nation has been a tribal confederation where loyalty to the tribe, clan and extended family has been strong.

There is an important distinction between the clans in South Kyrgyzstan, which has been strongly influenced by the Central Asian culture, and the Northern Kyrgyz who have been oriented towards the steppes in the north and towards the Kazakhs, with whom the Kyrgyz are closely related. The South Kyrgyz people were converted to Islam in the late 16th century, while the central and northern areas were Islamized only 150–200 years later.

The Kyrgyz speak a Turkish language, but also have strong Mongolian features in their culture. The traditional Kyrgyz trade has been hunting and nomadic herding.

The Kyrgyz areas were conquered by the Mongolian Zhongs (oyots) towards the end of the 17th century. The Kyrgyz were displaced to the surrounding areas and did not return until the Djungar Empire was crushed by the Chinese in 1758.

In the early 1800s the Kyrgyz areas conquered by Kokand -khanatet. The Russians began to penetrate the area in the mid-1800s. In 1862 they captured the fortress Pishpek, which today is Kyrgyzstan’s capital Bishkek (in the Soviet era called Frunze). Some groups fought against Russian takeover of the area. There are still Kyrgyz settlements in China and the Afghan part of the Pamir Mountains, where the population is descended from families who fled Kyrgyzstan at this time.

In the wake of the Russian conquest, large groups of Russian peasants who cultivated much of the Kyrgyz’s pasture lands in the lowlands followed. The Kyrgyz frustration peaked in a violent uprising in 1916 as the Russian tsar, during World War I, tried to print aid troops from all over Central Asia. Many thousands of Russians and Kyrgyz were killed and hundreds of thousands of Kyrgyz fled to China.

Following the Bolshevik takeover in Russia after the October Revolution in 1917, Kyrgyzstan first became part of the Turkestan Autonomous Soviet Republic, and from 1926 as an autonomous republic in the Russian Federation. It was not until 1936 that Kyrgyzstan became a Soviet republic of its own. At the republic level, the political leadership was dominated by Russians, but locally the old tribal and clan leadership survived more or less intact.

In Kyrgyzstan, Josef Stalin’s forced collectivization (see collective use) in the 1930s aimed to eradicate nomadic culture and make the Kyrgyz people permanent. The traditional economy of the Kyrgyz was destroyed. Again, many fled to China, while others resisted armed resistance. The small stratum of Kyrgyz intelligentsia built up under Lenin was greatly reduced during the great purifications in 1936-1939.

Kyrgyzstan’s deposits of ore and gemstones have provided a basis for some industrialization. However, during the Soviet period, Kyrgyzstan was one of the smallest and poorest republics. For the outside world, it was best known through the novels of the Chingis Ajtmatov, written in Russian.

In June 1990, during the Perestroika period, Kyrgyzstan was shaken by bloody settlements between ethnic Uzbeks and Kyrgyz in the southern city of Osh, where over two hundred people died. The poor handling of this crisis, as well as the discrediting of the local Communist Party and its leader Absamat Masalijev, opened the way for an outsider. The chairman of the Kyrgyz Academy of Sciences, physicist Askar Akajev, was appointed President of the Republic in October of that year.

During the unsuccessful coup attempt in August 1991, the local party and KGB leadership tried to topple Akajev, but instead the party itself was banned.

Kyrgyzstan became an independent republic on August 31, 1991. Askar Akajev was elected as the country’s president. Akajev was long regarded as very liberal. Freedom of the press in Kyrgyzstan has been considerably greater than in neighboring countries, but has gradually narrowed. Akajev has strengthened his power regionally by appointing governors (akimers) who are responsible to him. In 1994, he dissolved Kyrgyzstan’s supreme Soviet and established a new national assembly, Sjugorku Kenesj, with two chambers.

Kyrgyz politics and social life were increasingly dominated by ethnic Kyrgyz people. The Constitution of 5 May 1993 emphasized Kyrgyz people in a special way as state-bearing people, and the 1989 Language Act provided that all universities and colleges should transition to Kyrgyz education by 2000. All ethnic minorities were granted full citizenship rights, but many slaves still have preferred to move to Russia instead of fighting for their rights in the country.

The loss of the often highly qualified workforce represented by Europeans hit the Kyrgyz economy hard. In 1995, Akajev initiated a series of legislative changes aimed at persuading Europeans to stay. Among other things, in June 1994, Russian was introduced as the official language in areas mainly populated by slaves. At the same time, the slaves were promised a fair representation in government, and “dormant dual citizenship” with Russia.

In practice, anyone who moves from one country to another will be able to obtain citizenship in their new home country from the moment of moving. Migration flows out of Kyrgyzstan dropped significantly from 1995, and there are certain signs that some are moving back.