Early Paleolithic settlements of the acheulene type have been found in northwestern Somalia; Later Stone Age periods are mainly covered by loose finds and schematic rock paintings. A bargain sequence from Buur Heiba ​​in southern Somalia shows, among other things. that livestock probably began to be domesticated between 2,000 and 1,000 BC Skeletal finds from this period have characteristics similar to those of the current population. Somalia has often been identified with the country of Punt, mentioned in ancient Egyptian sources. During the second half of the first millennium AD coastal cities such as Mogadishu, Merka and Baraawe emerged, which carried on long-distance trade with the inland. From about the year 1000, Mogadishu was the dominant city on the east coast of Africa, before losing its position to Kilwa. See abbreviationfinder for geography, history, society, politics, and economy of Somalia. 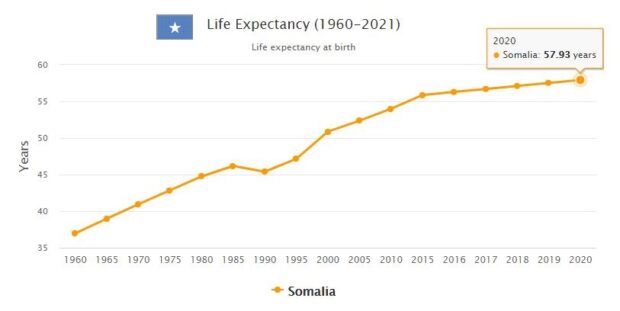 Somalis became known early on through their participation in international trade around the Red Sea to Egypt, with Arabia and with India and east to China. Along the coasts of the north and east, city states (part of Swahili culture) developed economically based on this trade, while nomadic pastoralism was the most important industry in the interior. As early as the 8th century the Somalis were Islamized, and Mogadishu became the religious and cultural capital of Swahili culture. Documents from the 12th century take up names of clans and show that many were already well established in the territories that are claimed today. Although the Somalis developed a distinct culture based on the nomadic tradition and Islam, the Somalis never came together under a political authority.

The situation on the sea roads towards India during the 19th century brought increased pressure from outside. In order to protect its naval station in Aden (present-day Yemen), in the 1880s, Britain established a British protectorate in northern Somalia, British Somaliland, whose borders against the French Somaliland protectorate in present-day Djibouti were established in 1888. In the following years, Italy acquired a similar grip over southern Somalia, called Italian Somaliland. In 1897, Ethiopia incorporated the Ogaden inhabited by Somalis.

Despite the Italian and British occupation, most of the Somalis remained fairly unaffected by the foreign regimes. But during the fascist regime in the 1920s and 1930s, the Italians invested considerable resources in developing and colonizing the country. During World War II, the British occupied Italian Somaliland, which, however, was entrusted by the UN to Italian administration from 1950 to prepare for independence in 1960. British Somaliland was also decolonized, and the two territories were united to the Republic of Somalia.since British Somaliland been independent for five days. Somali nationalism’s demand for Greater Somalia (with Djibouti, Ogaden and northern Kenya) was stranded on opposition from both European and African powers. Somalia then oriented itself toward the Soviet Union and received military and financial assistance from it. The merging of two former colonial areas with different laws and institutions caused difficulties. Clan rivalries were another strain.

In 1969, a group of soldiers, led by Mohammad Siyad Barre, power. All political parties and all statements of clan solidarity were banned. State ideology became “scientific socialism” in combination with Islam. The weak economic development in Somalia during the 1970s and 1980s was the result of two mutually reinforcing factors. On the one hand, the country lacked leaders who were interested in developing effective public institutions; instead, the management was characterized by disagreement, and the lack of a system of public accountability led to widespread corruption. On the other hand, the Cold War led to Somalia’s strategic position being exploited; military and financial assistance was obtained first from the east, then from the western bloc. The generous aid created an unproductive and unsustainable economy, but also helped to maintain the Somali state.

Somalia suffered severe drought in 1974-75 and several times during the 1980s. Further strain on social and economic life was the attempts to conquer the Ogaden from Ethiopia. With Soviet and Cuban help, Ethiopia fought back the Somali attack in 1977–78. The result was that Somalia broke with the Communist bloc and approached the United States, and that huge refugee camps for Somalis from Ogaden had to be set up.

During these adversities, Siyad Barre’s regime faltered. Rebellion broke out in both north and south, and in January 1991 he had to flee from Mogadishu. Then there was armed resistance to the regime in most of the country, organized in the north since 1982 in the Somali National Movement (SNM), in the middle parts of the United Somali Congress (USC), in the south in the Somali Patriotic Movement, among others.(SPM). The opposition was strongly clan-based and was directed at the clans that were financially and politically favored by Barre. Mogadishu-based USC businessmen proclaimed an interim government under Ali Mahdi Muhammad, with long-running battles with USC’s military branch under General Muhammad Farah Aidid as a result. Neither SNM nor SPM accepted Ali Mahdi Muhammad, which led to the war escalating even outside Mogadishu.

In May, SNM proclaimed the independent state of Somaliland in the northwest. Misgrowth led to a famine disaster, but the situation in Mogadishu made international aid broadcasts impossible. Only in December 1992 was a US-led UN force sent to the country. The effort developed into an effort to force peace without the parties’ consent. However, after a number of American soldiers were killed in degrading forms, the United States left the country in March 1994; the following year, the UN force also discontinued its operations. In June 1995, an alliance of militia supporting Aidid elected him president, but a few months later he was killed in battle. His role was taken over by one of his sons, Hussein Mohammad Aidid, and the militia’s power struggle continued.

During the last years of the 1990s, a series of peace initiatives ran out in the sand. Individual militia leaders tried to consolidate control over their home provinces, in some cases with efforts to establish a functioning society. In northeastern Somalia, in July 1998, the autonomous region of Puntland was proclaimed. Around the port city of Kismayu in the south, attempts were made to create an area called Jubaland. At the initiative of Djibouti President Ismail Omar Guelleh, around 400 Somalis gathered in 2000 for a reconciliation conference. However, Somaliland and Puntland refused to accept the provisional constitution that was formulated and which formed the basis for the election of a Provisional National Assembly, the Transitional National Assembly(TNA). Former prime minister, Abdiqassim Salad Hassan, was elected president, who appointed Ali Khalif Galaydh as prime minister and head of a transitional government (TNG).

TNA/TNG was opposed by the militia leaders, who in 2001 instead formed the Somali Reconciliation and Restoration Council (SRRC), a loose alliance led by Hussein Mohammad Aidid. Somalia was also hit by the economic crisis since the United States, after the September 11 attacks in 2001, designated the country as a terrorist nest. The company al-Barakat, which conducted a form of international banking, had its accounts blocked and millions of foreign Somalis were deprived of the opportunity to send money to their relatives.

In January 2004, a conference in Kenya culminated in a new parliament. Its 275 sites were distributed with 61 each for the four largest clans and 31 in total for the small clans. Puntland’s leader Abdullahi Yusuf Ahmed was elected as new president, who appointed African Union (AU) official Ali Mohammad Gedi as prime minister. However, this administration, strongly dominated by warlords, was characterized by great internal contradictions.

In the power vacuum that emerged after 1991, Islamic groups, especially Mogadishu, began to set up courts to investigate criminals under Sharia, Islamic law. The courts also came to be responsible for some social activities and education and built up armed police forces. Towards the end of the 1990s, a number of court militia in Mogadishu merged under the name of the Islamic Courts Union (UIC). The court militia drove the warlords out of Mogadishu and took control of significant parts of southern and central Somalia.

The UIC’s outward face was the moderate Islamist Sharif Sheikh Ahmad, but after the movement changed its name to the Supreme Judicial Council of Islam (SICC) at the end of June 2006, radical Hassan Dahir Aweys emerged as its strong man and in practice Somalia’s foremost leader. Aweys is suspected of being linked to al-Qaeda and has been placed on the list of wanted terrorists by the United States. The SICC enforced a strict interpretation of Islamic rules of life with British methods.

In December 2006, a UN-sanctioned force from the AU, AMISOM, was deployed to Somalia and with the support of Ethiopian troops, Mogadishu was admitted around the turn of the year 2006-07. The SICC was replaced in the years following the militia al-Shabab as the country’s leading Islamic force. The organization took control of most of the country in 2009 after the withdrawal of Ethiopian forces. That same year, Sharif Sheikh Ahmed was named new president. al-Shabab has since 2010 been pushed back by AMISOM as well as by Kenyan troops who have entered Somalia. The famine caused by drought that hit the region in 2011 further weakened al-Shabab. However, the operation is still active and has carried out a number of attacks every year.

In September 2011, a “roadmap” was adopted for a new government. In 2012, a new parliament with 275 members was appointed and a new constitution was approved in August of the same year. In September 2012 Parliament elected Hassan Sheikh Mohamud as new president. He was succeeded in February 2016 by Mohamed Abdullahi Mohamed.