The first immigration to the Solomon Islands probably took place in the 2nd millennium BCE. The first European to arrive was the Spanish seafarer Álvaro de Mendaña de Neira (1567). He named the island after the King Solomon of the Bible because he believed he had found the land of Ophir.

Later, Mendaña and other explorers made several unsuccessful attempts to find the islands, but it was 200 years before they were again visited by Europeans (Philip Carteret in 1767 and Louis-Antoine de Bougainville 1768).

In the 1850s, the Anglican Church began to mission on the islands. Australian plantation owners’ often brutal recruitment of farm workers reached the Solomon Islands in the 1860s. In 1885, Britain and Germany took control of each part of the islands.

In 1893, Germany surrendered most of its islands to the United Kingdom, which established a British protectorate; Germany retained Buka and Bougainville (included in German New Guinea). After World War I, the German territories came under Australian administration. 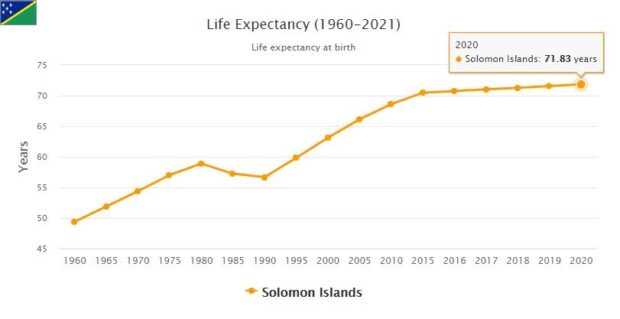 During World War II there were fierce battles over the Solomon Islands. Japan occupied Bougainville and Guadalcanal in 1942, but in February 1944 all the islands were recaptured by US forces. On July 7, 1978, the British Solomon Islands Protectorate became an independent state by the name of the Solomon Islands (Solomon Islands), with Peter Kenilorea as prime minister. See abbreviationfinder for geography, history, society, politics, and economy of Solomon Islands.

The Solomon Islands have no political parties in the Western sense; new coalitions between independent candidates and groups have replaced each other in rapid succession. A continuing theme of controversy has been concessions to foreign timber companies, following strong warnings that the harvesting of the tropical rain forest is happening at too high a pace.

An armed conflict in Bougainville, where the government of Papua New Guinea has been fighting against detachment attempts, has had a ripple effect on the Solomon Islands. During the search for rebels, Papuan forces repeatedly raided some of the islands. Solomon Islands has rejected Papuan claims of active assistance to the rebels in Bougainville, claiming only humanitarian aid is provided.

A protracted conflict between the two isatabu peoples, the indigenous people of the main island of Guadalcanal, and the Malaita tribe from the neighboring island of Malaita, was gradually sharpened in the 1990s. Both are ethnic Melanesians, but have different languages ​​and cultures. Many Malaysians have come to the Guadalcanal as immigrants and have gradually seized the economic power, which caused resentment among the indigenous population. The conflict has at times created civil war-like conditions.

In 1998–1999, the riots took a serious turn on Guadalcanal, with fighting between the militant groups Isatambu’s liberation movement (IFM) and the Malaita eagles (MEE). Many Malaysians were chased from the Guadalcanal. In 2000, the Malaita Eagles responded with a coup attempt, supported by police units. A peace agreement signed that year was not enforced. Conditions became increasingly chaotic, and the violence brought most people into deep poverty.

The conflict between the Isatabu and Malaita peoples was the reason why the Solomon Islands in July 2003 became the scene of the largest military action in the South Pacific since World War II. A multinational force of 2,300 soldiers and police – most Australians – went ashore to stop the fighting which since 1998 had cost approx. 250 lives and driven 20,000 on the run. The intervention took place without the UN’s intervention, but all 16 member states of the Pacific Islands Forum cooperated with their consent.

The expeditionary force should not only provide peace and order, but also address a comprehensive corruption within the state apparatus. On the Australian side, the action was justified by the fact that a lawless Solomon could in time become a haven for “drug trafficking, money laundering and international terrorism”.

Australia led a civilian recovery program. In 2005, many social functions had been normalized, but the program continued for a number of years. The Solomon Islands have also previously had close links with Australia, which has a fleet base in Honiara. An earthquake of magnitude 8.0 on the Richter scale triggered on April 1, 2006, a 10-meter high tidal wave that overturned over parts of the vast archipelago. 52 people were killed and 9,000 were made homeless, according to UN disaster experts.

In politics, much of the attention gathered around Prime Minister Manasseh Sogavare, who in May 2006 was elected prime minister during fierce protests. He has repeatedly criticized Australian members of the multinational force that in 2003 moved to stop warlike settlements between rival ethnic groups.

Sogavare took party to the country’s Attorney General, Julian Moti, who is also an Australian citizen and whom Australia has requested extradited as suspected of sexual abuse against minors. The Prime Minister responded to the extradition demand to threaten the Australians in the multinational aid force with deportation. Sogavare accused the Australians of “neo-colonialist” behavior, and has also publicly accused Australia of plans to kill him. However, Moti was released to Australia in the fall of 2007.

In December 2007, nine ministers resigned from the government in protest of Prime Minister Manasseh Sogavare’s leadership style. Sogavare had to step down from the Prime Minister’s post following a vote of no confidence, and opposition candidate Derek Sikua elected new governor. In 2014, however, Sogavare was appointed prime minister for the third time, but was replaced by Rick Houenipwela in 2017.