As early as the 1530s, the Spaniards tried to establish themselves on the coast of Guyana, but were displaced by the indigenous people. As a result of activities in the Caribbean, the Dutch West Indies Company established trading stations along the coast of present-day Guyana between 1616 and 1621. The British first established themselves in present-day Surinam in 1663, but exchanged with the Dutch colony Nieuw-Amsterdam (New York) in 1667.

The Netherlands therefore controlled the coast of present-day Guiana, Suriname and French Guiana until 1796, when the British fleet took control of the coast in the context of the Revolutionary War. The Dutch regained control in 1802, but already the following year, the British were back in place and also incorporated the areas of Essequibo, Berbice and Demerara which from then on were called British Guiana. The final border Venezuela were established in 1899, and the disputed Essequibo area (closer to 2 / 3 of the country) accrued British Guiana.

The conflict between Guyana and Venezuela over the right to Essequibo still prevails, especially after the independence of Guyana in 1966. See abbreviationfinder for geography, history, society, politics, and economy of Guyana.

The Dutch started tobacco – and later sugar production in the colony – and introduced a large number of African slaves for this purpose, as the local Native American population failed to work. The most famous slave revolt took place in 1763 and resulted in the deaths of about half of Europeans. The leader of the rebellion, Cuffy, is now considered a national hero. Slavery was abolished in 1838, and as early as 1842 the plantations were hit by extensive strikes where the former slaves demanded the right to own property.

From the mid-1800s Indians, Chinese and Syrians also began to immigrate to the country, and the population composition has influenced the policy. 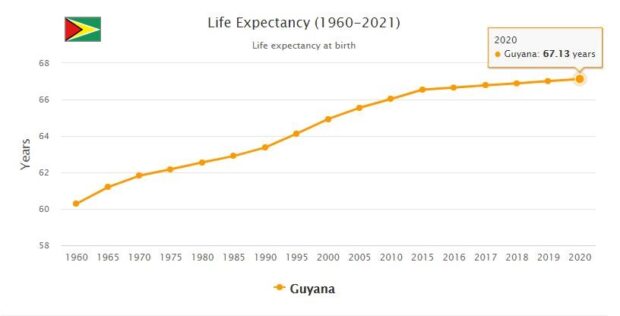 Even before independence in 1966, internal politics was characterized by progressive parties led by intellectuals. Cheddi Jagan and Forbes Burnham both formed the leadership of the People’s Progressive Party (PPP), established in 1950. Although the party won an overwhelming victory in 1953, the colony was ruled by the British governor until internal self-government was introduced in 1957. PPP became then split into an Indian faction led by Jagan and an African faction led by Burnham. The latter created his own party, the People’s National Congress (PNC), which gained power in 1964. Burnham received support from both the United States and the United Kingdom to avoid Jagan, with his more orthodox Marxist policies, coming to power.

In 1970, Burnham proclaimed Guyana as a cooperative republic. Between 1971 and 1976, the bauxite industry, shipyards, sugar and timber production were nationalized. The new policy was self-sufficient, and Guyana became more strongly linked to the socialist countries, while Burnham did much to emerge as one of the most important leaders in the Alliance-free Movement. The PNC used its political power to dominate the entire community and would not admit that politics did not work. Widespread corruption and smuggling economy characterized the country, and in the growing economic and social crisis of high unemployment, crime and strikes, Burnham even cemented his sovereignty in a questionable referendum in 1979.

The assassination of author and politician Walter Rodney gave rise to a political movement across the Caribbean, and Burnham’s dealings with fanatical religious groups led to a strained relationship with the United States. In November 1978, an American congressman was killed in the jungle of Guyana, where US minister Jim Jones and his People’s Temple had founded “Jonestown.” The drama ended with more than 900 members of the sect committing collective suicide (see the Jonestown Massacre).

In connection with the Falklands War in 1982, the controversy over Essequibo and Venezuela’s demands in the area flared up again, especially because of supposed gold deposits.

When Burnham died in 1985, Prime Minister Desmond Hoyte took over as president. His political line was more concentrated on the country’s economic problems than the political prestige and socialist profile that Burnham represented. The opposition party PPP has made strong attempts to achieve a division of power between the two traditionally rival parties. Economic reforms to encourage foreign investment began in 1986, and the United States has lifted Guyana’s export restrictions.

Opposition politician Cheddi Jagan (PPP) finally came to power in the 1992 elections. PNC’s almost unshakable power since independence from the UK was possible due to widespread electoral fraud more than voters’ favor. Jagan and the PPP have accused the PNC of tampering with electoral lists every year, and a revision and modernization of the electorate only took place in 1991 after strong pressure on then-President Desmond Hoyte. Jagan’s government tried unsuccessfully to privatize the bauxite plants and sugar plantations.

When Jagan died in 1997, extraordinary elections were held, which were won by widow Janet Jagan. She retired for health reasons in 1999 and was followed by Bharrat Jagdeo. Since the late 1990s, the political goals have been to unite the ethnic contradictions in the country, facilitate foreign investors and liquidate state ownership of the industry; the most tangible results have come in the latter area.

The continued strong concentration on sugar production reinforces the economic vulnerability. An occasional armed border dispute with neighboring Suriname over access to oil resources was brought before a UN court in 2004. In Jagdeo’s first five-year period, the country’s debt burden was significantly reduced, but the country is heavily dependent on US financial support. At the beginning of the new millennium, Guyana was still one of the poorest among America’s developed countries, with 30% of the population living below the poverty line.