In the April 2004 election, Abdelaziz Bouteflika was re-elected with 84% of the vote – according to the report. the official statements. His main counterpart, former Prime Minister Ali Benflis gained 8% and called the election a massive electoral fraud. Benflis and his supporters rejected the election result and filed a complaint with the Algerian Constitutional Court. Election observer Bruce George of the OSCE stated that the result was in line with the wishes of the Algerian people. See abbreviationfinder for geography, history, society, politics, and economy of Algeria.

In March, the government declared that a new oil pipeline, OZ2, would be commissioned in early 2005. It should contribute to increased oil exports from the country. The pipeline was built by the national oil company in collaboration with the French-Italian-British consortium Sonatrach. The 800 km long oil pipeline runs from Haoud el Amra in the southern part of the country to Arzew on the Mediterranean coast, and will be able to transport up to 25% of French oil consumption. OZ2 follows the same route as OZ1 built 30 years earlier. Algeria’s oil reserves are estimated to be 11,300 million barrels, but continued oil exploration could significantly increase this figure.

In June, two Algerian journalists Mohammed Benchicou from Le Matin newspaper and Hafnaoui Ghoul were arrested. Benchicou was sentenced to 2 years in prison and Ghoul was sentenced to 2 months in prison for slander. Both journalists had written about human rights violations in Algeria to the newspaper Le Soir d’Algérie. According to national and international observers, the two attacks on freedom of the press were a sign of a new wave of attacks on independent journalism in the country.

In July, Minister of Culture and Communications Mohamed Daho temporarily suspended the satellite TV channel al-Jazeera’s work in the country. The decision was made after a member of the opposition on a debate program criticized the government in strong terms. The official reason for the closure was that the work on the canal should be reorganized.

In January 2005, the government declared that GIA leader Nourredine Boudiafi had been arrested and that his second in command had been killed. In doing so, the authorities declared the GIA largely degraded. The same month, the government signed an agreement with Berber leaders. The points of the agreement were not disclosed, but Boutlefika stated that major investments will be made in the Capitol and greater consideration will be given to the language of the Berbers tamazight.

That same month, several protests came against the government’s decision to raise the price of butane gas, often used by the poorest in the country for cooking and heating.

In March 2005, an official report was issued admitting that security forces were responsible for the disappearance of more than 6,000 civilians during the armed conflict in the 1990s.

The November local elections were held in Kabylia, where the Berber majority won by the opposition. In December, Bouteflika returned from France, where he had been operated.

The ruling party gained an absolute majority in the parliamentary elections in May 2007. It came under the impression of growing violence in the country. In January, the Salafist group for preaching and fighting had changed their name to al-Qaeda in Islamic Maghreb and had launched a bloody offensive against the government.

In 2007, Algeria signed a contract with Russia for the supply of 55 fighter aircraft worth $ 1.9 billion. US $. In October 2009, reports emerged that Algeria had abolished arms deals with France because the weapons would contain Israeli components.

Throughout 2008, the United States transferred 7 Algiers from its Guantanamo concentration camp to Algeria, where they were all arrested on arrival and held for 8-14 days. They were then released, but at the same time authorities initiated lawsuits or investigations into them. During the year, 60-90 Algiers were killed by terror or counter-terror attacks. Torture continues to be widespread and the country is on the UN Committee Against Torture’s inspection list.

In November 2008, Parliament without debate removed the constitutional restriction restricting a president to sit for two terms of office. Therefore, in April 2009, Bouteflika could be elected to a 3rd presidential term with 90% of the vote. Several opposition parties boycotted the election and the Front des Forces socialists (FFS) talked about a “tsunami” of electoral fraud.

In November 2009, Egyptian and Algerian football fans clashed in Sudan, following a match between the two national teams in the qualifying tournament until the 2010 Soccer World Cups. The clash developed into a diplomatic crisis between the two countries, and Egypt withdrew its ambassador home. 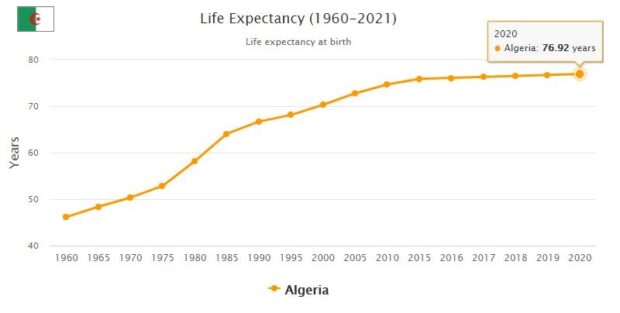