The older Stone Age (Paleolithic) is well known from numerous settlement finds; During the Late Paleolithic (about 30,000 years ago), both the local Seleucid culture and cultural forms with a wider spread appeared. In the east, the Neolithic with the Chorean culture entered during the 4000s BC. During the older Bronze Age (around 2,000 BC), the Madarov culture with its fortified settlements and extensive metal production played an important role in southwestern Slovakia. From the end of the Bronze Age there are large fire pit fields.

Early Iron Age finds (600s BC) link west to the Alps; Eastern Slovakia was closely related to the Tisza area (see Hungary, Prehistory). Later, during the Iron Age, Scythian and Thracian cultural elements can be coated in the East, while Celtic features occur in the West. From the first century AD shows, among other things, rich burial finds an immigration of Germanic groups, including squares. See abbreviationfinder for geography, history, society, politics, and economy of Slovakia. 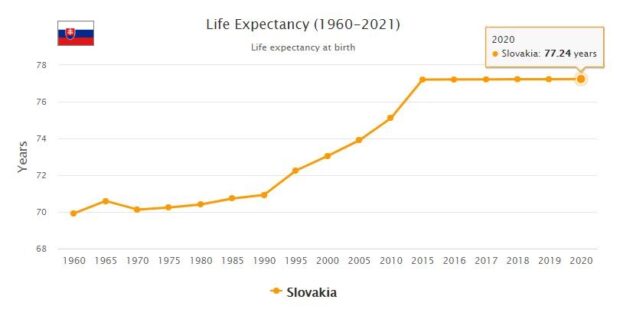 Our knowledge of Slovakia’s time of migration is poor, but the area was dominated by slaves in the 500s, who after 567 were under the rule of the Avars. Slovakia may have been part of Samo’s kingdom in the 600s, and in the beginning of the 800s an independent princess emerged on the Nitra River. From the 830s to the beginning of the 900s, Slovakia was a member of the Great Moorish Empire; at this time, Slovakia’s population switched to Christianity.

Subsequently, Slovakia was conquered by the Hungarians, who maintained control of the country for 1,000 years. Slovakia came to be called Upper Hungary, and a Hungarian population settled on plains and in larger valleys. A Hungarian-speaking landlord class emerged during the Middle Ages, and in the 13th century considerable German immigration took place. The Germans started mining and developed the urban system. In times of internal fragmentation in Hungary, major men in Slovakia could become independent, e.g. Máté Csák (d. 1321) and Jan Jiskra (d. 1466).

In the 15th century, the nobility’s power over the peasants was strengthened. Slovakia was affected by the Hushite war in the 1400s. During the 16th century many Germans and Slovaks transitioned to Lutheranism, while many Hungarians in Slovakia adopted Calvinism. In 1526, when the Ottomans occupied most of Hungary, the Slovak part of the house was Habsburg.

Until the beginning of the 18th century, Slovakia was repeatedly threatened by Turkish invasion. The Counter-Reformation gained momentum during the Thirty Years War and turned Protestants from a majority to a minority. In 1781, Emperor Joseph II proclaimed religious tolerance and abolished the quality of life. From the mid-19th century, strong tensions arose between Slovak and Hungarian nationalism. The Hungarian authorities wanted to Magyarize the Slovaks, ie. make them more Hungarian. Oppression and poverty drove many Slovaks to emigrate.

After the First World War, the state of Czechoslovakia was formed. Its Slovak part contained a large Hungarian minority. In agrarian and conservative Slovakia, there were significant contradictions to the Czech elite, and many Slovaks demanded internal self-government. Following the Munich agreement in September 1938, Slovakia was granted the requested autonomy. In November of the same year, the Hungarian border area must be resigned to Hungary. The nationalists gained power in Slovakia and created an authoritarian society based on Nazi patterns. Some of them wanted to make Slovakia completely independent. On March 9, 1939, the Prague Central Government deposed the country government in Slovakia. The separatists then appealed to Hitler, and under German pressure Slovakia declared itself independent with Jozef Tiso as president. In practice, it became a German sound state. Slovakia participated in World War II on the German side, and the Jews in the country were deported. In August 1944, a communist-inspired partisan uprising erupted by German troops.

When Czechoslovakia resurfaced after the war, Slovakia regained the abandoned territories in the south and gained limited autonomy. The People’s Democratic regime that took power in 1948 was centralized, and many Slovak communists were purged, accused of “bourgeois nationalism”. During the 1960s, Slovakia was industrialized, which in 1969 gained full internal autonomy. The so-called normalization after the Prague Spring 1968 encountered little resistance in Slovakia. The regime-critical movement never reached it, but after the “velvet revolution” in Prague in 1989, nationalism came to new life.

A leftist nationalist party, HZDS (Movement for a Democratic Slovakia), won the elections to the Slovak state parliament in 1992. HZDS leader Vladimír Mečiar called for greater autonomy, and the leaders of Prague proposed a division of the country. On January 1, the Republic of Slovakia was created. Michal Kováč, HZDS Deputy Chairman, was elected the country’s first head of state. The Republic’s first year of life presented major economic problems, a strong divide between the parties and a series of political crises. After a recent election in the fall of 1994, Mečiar returned as prime minister at the head of a coalition government with, among other things, the very nationalist Slovak National Party (SNS). The following years were marked by a strong confrontation policy between government and opposition,

After the 1998 parliamentary elections, a united opposition – despite the fact that HZDS again became the largest party – could unite and form a majority government led by Mikuláš Dzurinda of the Slovak Democratic Coalition (SDK). The government implemented a series of economic and legal reforms that improved relations with the EU and NATO, as well as relations with Hungary. Slovakia was able to start membership negotiations with the EU in 2000, and shortly after Dzurinda formed a new, broad coalition after the autumn 2002 elections, Slovakia was given a clear sign for accession to both the EU and NATO. The following year, 93 percent of voters voted yes to the EU, and in 2004 Slovakia became a member of the two organizations. At the New Year 2009, the euro was introduced as a currency.

During Dzurinda’s eight years in power (1998–2006), Slovakia experienced high economic growth. An improved business climate contributed to increased foreign investment, not least in the automotive industry. However, unemployment remained high, and the government’s savings policy hit many Slovakians. In 2006, the left-wing party Smer-SD won the election and party leader Robert Fico formed a majority government together with HZDS and the right-wing nationalist SNS. During Fico’s reign, relations with Hungary deteriorated again.

Despite the fact that Smer-SD went ahead and became by far the largest party in the 2010 parliamentary elections, Fico’s government was forced to resign, as both partners went backwards. Instead, Christian Democrat Iveta Radicová took office as prime minister of a majority government consisting of four liberal and Christian democratic parties.

Radicovas bourgeois government, however, became short-lived in power. Split arose between the government parties regarding Slovakia’s contribution to the euro area crisis fund in 2011. New elections were held in 2012 in which Smer-SD went ahead strongly and Robert Fico was able to form his own majority government. A major contributor to the change in opinion was a corruption legacy that was discovered in late 2011.

However, the corruption charges continued during the Smer-SD, which in the 2016 parliamentary elections went down sharply, and Fico was forced to form a coalition in order to remain as head of government. The cooperation within the government, which, in addition to Smer-SD, also included right-wing extremists SNS, the center-right party Network and the Hungarian Bron (Most-Hid), has not always been painless. The entire Parliament has been politically driven to the right and characterized by the discussion on immigration and migration in connection with the so-called refugee crisis in 2015 and onwards. Slovakia, like Hungary, has opposed the EU’s demand for a certain number of refugees.

At the end of February 2018, the investigative journalist Ján Kuciak (1990–2018) and his partner in Bratislava were murdered. The murder was suspected to have been carried out on the order of the Italian mafia, whose connections with the rulers of Slovakia Kuciak was investigating. No person has so far been convicted of the murder.

The assassination, which, according to many’s presumption, showed how corruption continued to permeate Slovak society, led to widespread popular demonstrations and triggered a serious political crisis. Several members of the government were forced to step down, including the powerful Minister of the Interior Róbert Kaliňák (born 1971), as well as a number of highly regarded advisers/employees of the government.

Finally, Prime Minister Fico also resigned and was replaced by Deputy Prime Minister Peter Pellegrini, also he from Smer-SD. After the murder, according to opinion polls, the party’s support had dropped to around 20 percent, but it was still the largest single party. Many also believed that Fico, who remained as party leader for Smer-SD, continued to rule behind the scenes; others believed that he himself was in the hands of powerful business interests, some with ties to international crime.