According to archaeological finds, Nicaragua has been inhabited for 20,000-30,000 years. By the end of the 15th century, Nicaragua was populated by many different ethnic groups, and Spanish officials estimated that the population was around 600,000 at the Spanish conquest.

Nicaragua was a Spanish colony in the period 1524–1821, and became independent in 1838. The country was ruled by the Somoza family dynasty from 1934 to 1979, when a widespread popular revolt led by the Sandinist Front instituted revolution and ruled the country until 1990, a period marked by war and trade boycott. 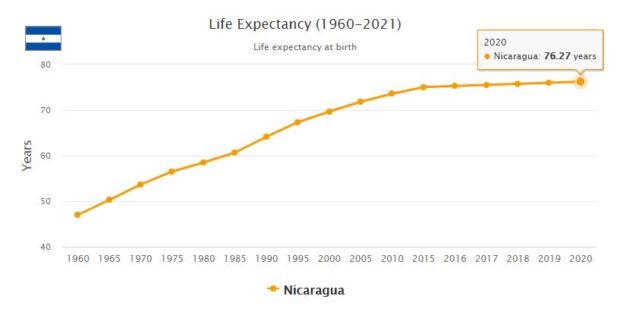 Before the arrival of the Spaniards in Nicaragua, the population consisted of scattered small communities that do not have the same high cultural characteristics as, for example, in Mexico and Guatemala. See abbreviationfinder for geography, history, society, politics, and economy of Nicaragua. Migrations from both the north and the south brought population groups to the Pacific coast and the areas around the Great Lakes. People also lived in the jungle of the tropical lowlands against the Caribbean.

Although Kristoffer Columbus so far touched the coast in 1502, it was not until 1523 that the Spaniards occupied the present Nicaragua. In the same year, Francisco Hernández de Córdoba founded the city of Granada on Lake Nicaragua. The colonists found little interest in Nicaragua, but met stiff resistance from the population, which in a short time was significantly reduced. More than 40,000 indigenous peoples were sent as slaves to the mines in Peru.

The areas on the Caribbean coast were of little interest to the Spaniards, and above all British pirates gained influence there. The British established a local Mosquiti kingdoms in 1687 which provided indirect British rule. The British took advantage of the misconceptions of the Spaniards, and the colonial era was characterized by frequent attacks from the east from Spanish cities and a power struggle between Spain and the United Kingdom.

Together with Mexico and the rest of Central America, Nicaragua gained its independence in 1821 as part of the Central American Federation. It was not until 1838 that the country emerged as a republic of its own. Nevertheless, the British retained their foothold in Mosquitia. In connection with the gold rush to California from 1848, Nicaragua became an important link between the Caribbean and the Pacific. The United States discovered its strategic location and tried to push the British out of the area, based on the Monroe doctrine. The British and Americans were included in the 1850 Clayton-Bulwer Treaty which meant that neither country could colonize areas of Central America. The Conservatives (with Granada as the main seat) and the Liberals (with León as the main seat) were in constant conflict in Nicaragua.

Inspired by the United States’ annexation of northern Mexico, young plantation owner William Walker arrived in Nicaragua and joined the liberals in the Civil War in 1855. A year later, he proclaimed himself president of Nicaragua, where he would reintroduce slavery and make English the official language.. He was recognized by Washington. The Central American states joined forces in the war against Walker, who in 1857 had to leave the country. The defeat meant that the Conservatives had a strong hold on power for over 30 years. In the same period, coffee exports developed into Nicaragua’s most important economic base. Traditional common land was confiscated, and the landless peasants were forced to work for the coffee barons who made up the new power elite. In 1881, this led to a major uproar among Indigenous people in the Matagala Province. Hundreds of indigenous people perished in the massacres of President Zavala’s army. This process became even more extensive under the liberal dictator José Santos Zelaya (1893-1909), who also sold large parts of the country to foreign investors. Zelaya also incorporated with military force Mosquitia in 1894, and the region has since borne his name.

During Zelaya’s liberal reforms, modern urban bourgeoisie became dominant in relation to traditional landowners in the countryside. His strong nationalism also led to conflicts with the United States. Serious attempts were made to dig a canal in southern Nicaragua (San Juán River) in the 1880s. When the United States embarked on the canal project in Panama in 1903, Zelaya offered investors in Europe and Japan to build a rival canal in Nicaragua. Based on the Monroe doctrine, the United States intervened militarily in 1909 and deposed Zelaya.

The United States installed the bookkeeper in a US mining company, Adolfo Díaz, as new conservative president. Díaz was so loyal to Americans that rail and customs were sold to US private companies, and Brown Brothers Bank controlled the national economy. In 1912, the liberal Benjamin Zeledón led a wide-scale revolt against the US-backed government. As a result, US forces once again invaded, and this time the occupation was prolonged. Loyal conservatives retained power and won the elections, which were obviously marked by cheating, in 1912, 1916 and 1920.

In 1925, US troops left Nicaragua after installing a compromise government with Conservative Solórzano as president and Liberal Sacasa as vice president. A few months later, however, Emiliano Chamorro took power in a coup d’etat and excluded all liberals from the National Assembly. The US intervened for the third time, and Díaz was again placed in the presidential chair. Sacasa established an “exile government” in Puerto Cabezas on the Caribbean coast in 1926 from which the civil war was waged. In May 1927, Sacasa and President Díaz signed a peace declaration. But many of the Liberal army departments refused to accept the treaty, which meant that the United States could maintain its control. Augusto César Sandino was opposed to all compromise solutions and insisted on fighting until all US troops had left Nicaragua. Although Liberal Moncada was elected president in 1928, Sandino’s troops intensified the war in the mountains. The battle was more clearly characterized by a revolutionary struggle and is often characterized as the first guerrilla war in Latin America. Sandino was a charismatic leadership figure, and his position became clear when the movement collapsed after he was assassinated in 1934.

The American troops left Nicaragua in 1933, but left behind a national guard they had trained under the leadership of Anastasio Somoza García, an admirer of the fascist movements of Europe at the time. In 1936, he gained state power and full control over the Liberal Party. This complete military and political control was to affect Nicaragua for over 40 years. Somoza became America’s most faithful partner in Latin America and represented one of the hardest dictatorships on the continent.

The Somoza family gained increasingly economic power through corruption, smuggling, expropriation and liquidation. Most important industries were in the clan’s hands as early as the Second World War. Somoza also took an active part in the Cold War, including providing the country as a base for the failed invasion of the Gulf of Pig in Cuba in 1961. The first Somozadictor was shot in 1956, but his sons made Nicaragua a family affair. This became especially evident after the earthquake in 1972 that left the capital Managua in gravel. The Somoza family put most of the international disaster relief in their own pockets and made sure their own businesses got back on their feet. But throughout the 1970s, opposition to the family grew, including the bourgeoisie.

The Sandinist Revolution in 1979

The Sandinist Front for National Liberation (Frente Sandinista de Liberación Nacional, FSLN) was founded in 1961 and took its name from Sandino’s struggle in the 1920s and 1930s. The most important leader from the start was Carlos Fonseca Amador, who fell in battle in 1976. The FSLN considered armed struggle and broad popular mobilization as necessary for a fundamental change of Nicaraguan society. In the 1960s, the FSLN operated according to the guerrilla principle, but especially after the earthquake in 1972, the FSLN developed into a mass movement that eventually had networks across most of the country. The flavor of the revolution came in 1978 with fierce fighting in the provincial capitals of León, Matagalpa and Estelí as well as the siege of the presidential palace in Managua. Anastasio Somoza Debayle gained little sympathy with his brutal way of fighting back. Also, US President Jimmy Carter understood that Somoza was isolated. The battle was lost to Somoza when the FSLN had taken control of all the cities except Managua; in July 1979 he left the country. Two days later, FSLN captured Managua without a fight.

The war had left over 50,000 dead, a shattered industry and an empty treasury. The preliminary “junta for national reconstruction” gave way to bourgeois representatives and created a sympathetic image for the outside world. The death penalty was abolished, land reform, health and education were given the highest priority, and politically the revolution emerged as alliance-free and national. Wide international support for the reconstruction of the country was obtained, including from the United States. Significant progress was made in the first year, but the bourgeoisie began to express its dissatisfaction with the radical line of the revolution.

When Ronald Reagan took over as president in 1981, the US’s benevolence to the revolution ended. The support was withdrawn, and the United States instead took part in the preparations to overthrow the Sandinists, which were considered a dangerous inspiration for the rest of Central America. Counter-revolutionary groups with former national guardians at the head were trained in Honduras with Argentine advisers, funded by the United States, which in 1984 also mined Nicaraguan ports. Nicaragua brought all these matters before the International Court of Justice in The Hague, which, in a historic ruling two years later, ordered the United States to pay a larger amount of damages for violations of international law. However, the United States refused to accept the ruling, despite a resolution from UN Security Council.

From bases in Honduras and later in Costa Rica, contras caused great destruction and loss of human life. Contras tactics were largely aimed at civilians rather than military targets. In addition, mosquitoes on the east coast took weapons of internal self-government. Nicaragua’s economy deteriorated drastically due to the major defense spending, destruction and trade boycott introduced by the United States in 1985. When the five Central American presidents agreed on a 1987 peace plan for the region, this coincided with the Iran-contras revelations implicating high-ranking US politicians and military. The negotiations led to a ceasefire, and free elections were held in 1990. Although FSLN and Daniel Ortega Saavedra won a solid election victory in 1984, the United States did not consider the election legitimate. A nearly unanimous opposition of 14 parties came together in 1990 in the Coalition of the National Opposition (UNO), which put newspaper owner Violeta Barrios de Chamorro as presidential candidate. The election was a defeat for the FSLN, but the transfer of the presidential office to Chamorro as Latin America’s first elected female president took place without drama in April 1990.