Fiji’s original population was Melanesians, with a touch of Polynesians. In 1643 Dutch explorer Abel Tasman came to Fiji as the first European. There were many tribal wars in the 19th century; in 1871–1873 an unsuccessful attempt to establish a kingdom was made.

The country was a British colony in 1874-1970. This led to large-scale immigration of Indian plantation workers on British initiative, and the Indians became the largest group of people. Immigration stopped in 1917.

Fiji gained internal autonomy from 1966 and full independence in October 1970. 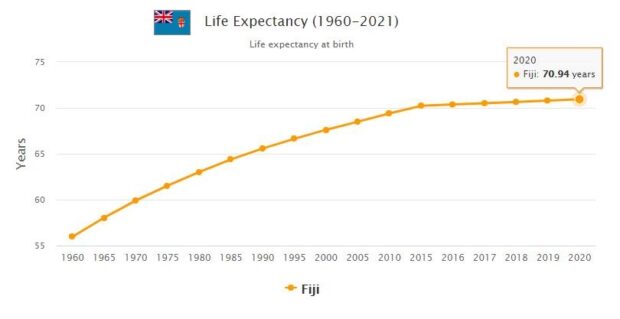 Strong ethnic contradictions between Melanesians (ethnic Fijians) and Indians have characterized political life. Ratu Sir Kamisese Mara was prime minister in 1970–1987. His Melanesian Alliance Party lost the election in 1987, and the first government with Indians in majority was formed. It was immediately overthrown by a military coup led by Colonel, later General, Sitiveni Rabuka.

Fiji was a member of the British Commonwealth with the British monarch as head of state. See abbreviationfinder for geography, history, society, politics, and economy of Fiji. The Queen’s representative refused to accept the military regime. Rabuka carried out a new coup in September 1987, abolished the constitution, deposed the queen, declared Fiji as a republic and exited the Commonwealth.

The Constitution was amended in 1990 so that the Melanesians were secured a majority in the National Assembly. The Prime Minister must also be Melanesian. Mara now returned as head of government; the coup leader Rabuka joined the government and took over as prime minister in 1992.

The upheaval in 1987 had significant consequences for Fiji’s economy and its relationship with the outside world. Discrimination was lodged by the Indian team. Many, especially those with higher education, emigrated. Thus, the indigenous people became minorities in the population in 1989, with a declining share in the following years.

In 1997, Fiji was given a new constitution without open racial discrimination. The same year, the country again became a member of the British Commonwealth. Following the 1999 elections, Mahendra Chaudhry Fiji’s first indicted prime minister. His only years in power were dramatic, with violence and civil disobedience from Fiji nationalists. On May 19, 2000, a group of armed men entered the Parliament building; Chaudhry and 30 other ministers and top officials were held hostage for eight weeks.

The coup leader George Speight launched himself as a champion of the indigenous people and threatened to kill the hostages. Indians were subjected to violence and harassment. On July 4, the military deployed a civilian interim government without indiscriminate government ministers under Laisenia Qarase. On July 29, Speight was arrested along with many of his followers; The coup leader was sentenced to death for treason in 2002, but the sentence was later turned into life imprisonment.

In the 2001 election, Laisenia Qarase triumphed with its new United People’s Party (SDL). In contravention of the Constitution, he formed a purely Fijian government, but in 2003 the Supreme Court ordered him to give the indicted Labor Party (Labor Party) prime ministers a seat in the government.

Under a new coup regime in 2006, two elections could have laid the foundation for democratization, but led to strong political turbulence and a new military coup. The army declared the election results invalid and took the government under the command of Defense Chief, Commander Frank Bainimarama. Bainimarama has been prime minister since 2007.

Prior to the coup, President Ratu Josefa Iloilo had been re-elected by the Board of Governors for a new five-year term. Two months later, the parliamentary elections gave a stiff majority, and thus renewed mandate, to Prime Minister Qarase and his United Nationalist Party (SDL). The largest opposition party – the Indian-dominated Labor Party – also retained its ministerial posts. The two dominant parties reflect the polarization between ethnic Fijians (Melanesians) and the indigenous part of the population. The ethnic divide still forms a deep political schism.

After the re-election, Qarase presented a contentious bill for amnesty for some of the leaders of the coup in 2000. The controversy was also a decision on the allocation of land to ethnic Fijians. After a few months of political tug of war, Commander Josaia Bainimarama seized power on December 5, 2006. The coup leader accused the government of being corrupt and of discriminating against ethnic Indians. Bainimarama gave himself the post of prime minister, but allowed President Iloilo to continue. Mahendra Chaudhry, Fiji’s first indicted prime minister, who was overthrown by a coup in 2000, received important cabinet positions in the coup government.

The coup in 2006 caused international condemnation. Fiji was banned from the British Commonwealth, and EU aid was frozen until elections were held. Australia, New Zealand and the smaller neighboring states imposed sanctions. Bainimarama declared that he needed time to clean up the corruption after previously elected governments.

In September 2007, he declared his state of emergency following persistent rumors of a counter-coup. In November, an announcement came that the counter-coup had been thwarted. Several high-ranking officers and politicians were arrested. Allegations that Australia and New Zealand should have participated in preparations for a counter-coup were strongly opposed by both countries. Fiji has traditionally had a close relationship with Australia – politically, commercially and militarily.

At the turn of the year 2007/2008, Bainimarama announced a plan to return to a parliamentary system in 2010. As a self-appointed prime minister, in February 2009 he also appointed chairman of Fiji’s traditional chieftaincy council. He himself had dissolved the old chief council because it did not accept the one he had appointed as the country’s vice president. Bainimarama authorized himself to appoint all 52 members of the chief council on the recommendation of local councils. The previous council had 62 members, including some lifelong members. In the new chief council, the term of office for all is limited to three years. Fiji has 225 local executives who are entitled to the title of title.

After a new political turmoil, the military seized power in April 2009. A higher court had declared Bainimarama’s three-year-old military regime illegal this month, demanding early re-election. Bainimarama’s close ally, 88-year-old and morbid President Iloilo, then fought back against the court. The President rescinded the Constitution, fired the judges and reinstated Bainimarama as prime minister.

Elections were now postponed. Bainimarama justified this because Fiji needed a new electoral system to dampen ethnic tensions that had triggered previous coups in 1987 and 2000. Others argued that regardless of electoral regime, Fiji would be equally characterized by political divisions on ethnic grounds. The announcement that Fiji would remain a military regime for another five years, with elections only in September 2014, prompted new international criticism. Fiji was now ousted from the Pacific Pacific Forum, which had set an ultimatum demanding new elections in 2009.

After several years of delays, a Democratic election was held on September 17, 2014. Bainimarama’s party FijiFirst won by 59.2 percent of the vote, and the election was considered credible by international observers.

Since independence in 1970, Fiji has participated in many of the UN peacekeeping operations. Following pressure from Australia and New Zealand, this role was significantly reduced by the UN in 2007. Without the peace role, it is doubtful whether Fiji’s military would become strong enough to act as coup makers. The country had only 200 military servicemen at independence in 1970, but after UN participation in Lebanon and Sinai, that number had doubled in 1986. The following year came the first military coup.

In total, nearly 25,000 Fiji soldiers have participated in UN operations, a very large figure for a nation with just under one million inhabitants. The UN soldiers have contributed significantly to GDP and the country’s foreign exchange reserves.

The economy has been among Prime Minister Bainimarama’s biggest challenges. Economic growth has been low at less than 1% annually since the turn of the millennium, and forecasts indicate a negative growth. Lower tax revenues have forced Bainimarama to cut government spending by 30%. In April 2009, the Fiji dollar was devalued by 20% in order to increase exports and attract more tourists to the island kingdom.

The tourism industry accounts for approx. 30% of GDP and employ most with 23,400 employees. Fiji noted near record with over 500,000 foreign tourists in 2008, but in 2009 there was a steep decline following new political turbulence. Australia and New Zealand have discouraged visits, both on principle and because the safety of the main island of Suva is considered questionable. 56% of tourists in 2008 came from Australia/New Zealand, 15% from Europe.