Zambia has a rich and relatively well-researched prehistory. Acheulene-type stone tools are known from the Victoria Falls area and from the Kalambo Falls. A skull of early Homo sapiens found near Kabwe probably belongs to the late acheulene culture. Other finds from Kalambo are 80,000–100,000 years old. From the last 10,000 years of hunter and gatherer cultures there are a number of finds, including unusually well-preserved biological material of food plants as well as containers and leather clothing from the Gwisho Springs find site. Schematic and naturalistic rock paintings are widespread. See abbreviationfinder for geography, history, society, politics, and economy of Zambia.

Signs of livestock dating to the 100 century BC available from western Zambia. During the first millennium AD emerged iron-working farmer communities throughout Zambia. Agriculture expanded further after about 1000 AD, at the same time as new ceramic traditions were introduced. Mining was also intensified, in particular copper mining. can be read from the cross-shaped spines commonly found in Central African excavations. Gold objects and imported glass beads from the 15th century found in Ingombe Ilede on the Zambezi River testify to social differences and long-distance trade. 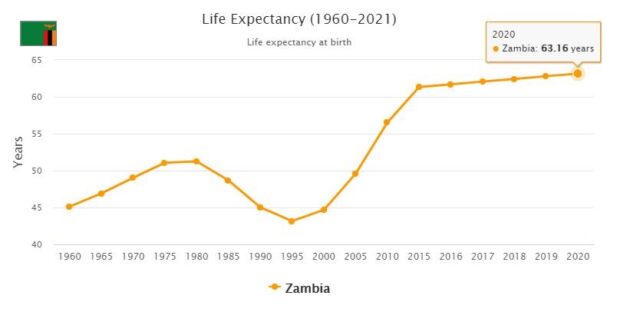 As in the rest of southern Africa, Zambia san people were the first known population. The farming tonga in southern Zambia is the group in today’s Zambia that lived longest in the current settlements, about a thousand years. From the 17th century, a number of other Slavic-speaking people settled in the region. From the Lubar kingdom of present-day Congo came in the 19th century bemba, the largest of Zambia’s 73 people. In the west, as early as the 18th century, lozi had developed a river culture at Zambezi. They were subjugated in the 1830s by kololo, a Sotho people from the south, and the country, called Barotseland, became known to Europe through Livingstone’s travels in the region in the 1850s. Later, the lozi reigned supreme. Their King Lewanika signed an agreement in 1890 with the British South Africa Company, which under Cecil Rhodes was in the process of conquering the entire Zambezi region.

During the 1890s, the people of what was then Rhodesia (now Zambia and Zimbabwe) were forced to submit to the company. In 1911, the area now known as Zambia was named Northern Rhodesia. The railway construction linked the region to South Africa. When the area was taken over by the British crown in 1924, there were only just over 5,500 whites in the country. The numbers of whites grew as Northern Rhodesia developed during the interwar world the so-called copper belt and became one of the world’s largest copper exporters. The profits from copper exports were not used for the social and economic development of Africans. Nor were the profits used for industrialization of Zambia. African agriculture suffered as families remained in the villages while the men on contract worked in the mines.

After the Second World War, the contradiction between governing and governing was intensified by British plans for a Central African Federation between Northern Rhodesia, Southern Rhodesia (now Zimbabwe) and Nyasaland (now Malawi). Fearing that the Federation would mean the victory of racism in the region, Africans began to organize their resistance. In 1948, the Northern Rhodesia Congress (1951 changed to the Northern Rhodesia African National Congress) was formed. In 1953, however, the Central African Federation was established with a constitution that secured the dominion of the whites. A radical bankruptcy within the ANC broke out of the party in 1958 and demanded independence. The regime banned the new party in 1959 and imprisoned its leader Kenneth Kaunda, but from 1960 he was able to continue the fight at the head of the United National Independence Party (UNIP). In 1963 the federation was dissolved, and in 1964 the Republic of Zambia was declared with Kaunda as president and UNIP as the dominant party in parliament (55 out of 75 seats).

By independence, Zambia was financially dependent on the neighbors in the south, and the economy was falling with the copper extraction and copper prices on the London metal exchange. Southern Rhodesia unilaterally proclaimed itself as the independent Rhodesia in 1965 (see Zimbabwe, History). However, important results were achieved during Zambia’s first period of independence. New communications were opened, especially with Chinese help, and together with Tanzania a new railroad was built to Dar es-Salaam, which reduced dependence on South Africa. The state took control of the country’s natural resources and the majority of the mining companies. The education and health care system was expanded. As ideology for this nation-building, Kaunda launched “humanism,” a synthesis of an African past, seen in a romantic shimmer, and Christian ethics.