When the Spaniards discovered the coasts of the area that later became the name Guyana (Berbice) in 1498, it was sparsely populated by Caribbean and Arawak Indians. Spaniards and Portuguese showed little interest in the area, and it was not until 1651 that a British trading station was set up by Barbados, which enticed other Europeans to invest in the new colony.

Plantation was undertaken with African slaves who cultivated cocoa, coffee, sugar and cotton. Jews from Brazil built America’s first synagogue in Suriname in 1665.

By the Breda agreement in 1667, the United Kingdom swapped rights over Suriname with the Netherlands in favor of Nieuw Amsterdam (New York). The Netherlands paid little attention to this colony where slave rebellion was very widespread. Control of the colony alternated between the Netherlands, Britain and France during the Napoleonic Wars until the Netherlands regained it for good in 1815.

When slavery ceased in 1863, a larger number of workers immigrated from India, Java and China, making the population, and thus the politics, very heterogeneous. 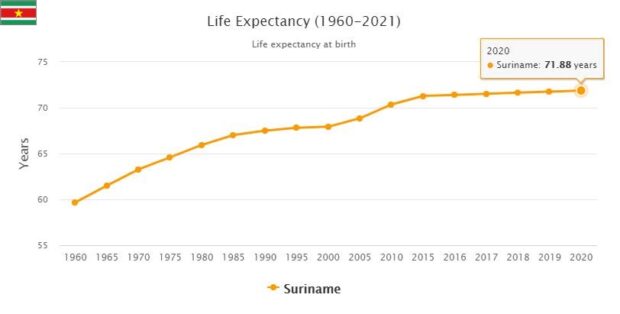 In 1954, Surinam (then known as Dutch Guiana) gained internal self-government, and only in November 1975 was full independence. The first election in the new state in 1977 was won by the Suriname National Party (National Party Suriname, NPS), which is comprised of African- bred Creole. Henck Arron became prime minister and Johan Ferrier president. See abbreviationfinder for geography, history, society, politics, and economy of Suriname.

Due to the poor outlook on education, work and social security, almost half of the population left Surinam during the first years to try their luck in the Netherlands. The Netherlands provided a substantial lump sum and further development aid commitments to Surinam, but very little was achieved in the first years after 1975. Constant political rivalry, corruption and bureaucracy led to marked discontent in the country. Bauxite extraction and a separate aluminum plant were established, but it was international aluminum companies that made the profit.

Most of the Dutch development aid also found its way back to the donor country through Dutch companies that still had the financial power.

The Arron government was ousted by a group of younger officers in 1980, but President Ferrier was seated. The military leadership and ministers were imprisoned, and a six-man civil and military leadership took power with Henk Chin A Sen as prime minister. Despite protests from the Netherlands, a radical reform program was implemented. The Constitution and impending elections were suspended. In February 1982, the revolutionary strong man, Colonel Lieutenant Désiré Bouterse, resigned the president and himself assumed the position of “leader of the revolution”, while civilian Henri Neijhorst was named prime minister after a disagreement between Chin A Sen and Bouterse.

The executions of 15 oppositionists in December 1982 sparked sharp reactions, and both the Netherlands and the US suspended all economic and military cooperation. Neijhorst’s government resigned, and the new government led by Liagat Ali Errol Alibux suffered the same fate in January 1984 following extensive strikes and pressure from the unions. Under the leadership of Bouterse, attempts were made to enter into negotiations with the former political parties, largely to satisfy the demands the Netherlands set to resume financial support.

In 1986, businessman Pretaapnarian Radbakishun of the Progressive Reform Party (Vooruitstrevende Reformerpartij, VHP) was appointed prime minister with the promise of reinstating democracy.

In a 1987 referendum, an overwhelming majority voted in favor of the introduction of a new constitution, leading to elections in November of that year. The opposition coalition United Front for Democracy and Development (UFDD) won an overwhelming victory, while the military leadership’s National Democratic Party (National Democratic Party, NDP) only got 10 percent of the vote. Ramsewak Shankar was appointed prime minister, but was deposed by the army on Christmas Eve 1990 and replaced by Jules Wijdenbosch from the NDP until the 1991 election.

Surinam’s financial situation was very critical at this time. At the same time, since 1984, Surinam’s Liberation Army, led by Ronnie Brunswijk, had been carrying out armed insurgency and sabotage from neighboring French Guiana. The 1991 election became a scarce victory for the opposition front, now under the name Ny Front (Nieuw Front, NF). It took four months before Ronald Venetiaan was declared president.

The new government agreed to limit the influence of the army, restore peace in the country and maintain a constructive relationship with the Netherlands. During 1992, development cooperation with the Netherlands was restored, and a peace agreement was reached with the Suriname Liberation Army. In 1993, Dési Bouterse resigned as head of the army; in 1999 he was sentenced in absentia in the Netherlands to 16 years in prison for cocaine smuggling.

Drastic economic tightening was praised by the International Monetary Fund (IMF), but led to an increase in poverty. The 1996 election led to a coalition government led by Jules Wijdenbosch from the NDP. The new government has placed greater emphasis on social improvements and increased national control over bauxite production and timber extraction. Wijdenbosch, however, was unable to fulfill the promises, the coalition government went from crisis to crisis and finally fell completely. In 2000, he was forced to print new elections and suffered a staggering defeat.

Voters’ dissatisfaction gave the Nieuwe Front voor Democratie coalition 47.3 percent of the vote, with the result of Ronald Venetiaan again becoming president. He was re-elected in 2005, and the Liberal-led coalition could continue with a stiff majority in the National Assembly.

The 2010 election was won by Dési Bouterse, who had previously been accused and convicted of cocaine smuggling. Europol’s arrest warrant against him was invalidated because he enjoys international immunity as head of state. In addition to drug crime, Bouterse is charged with several war crimes that must have occurred during the military regime of the 1980s. The United States and the Netherlands have warned that normal relations with Suriname cannot be maintained with Bouterse as president.

At the beginning of the 2000s, the UN had to be drawn into a dispute with neighboring Guyana about the border line in the oil-rich offshore areas. At the same time, the country was hit by falling prices for bananas, bauxite and other important export goods. Unlike other countries in the region, Suriname, despite its interesting and beautiful nature, has not succeeded in exploiting the tourism industry’s opportunities.

In order to strengthen confidence in the country’s economy, currency guilders were replaced in 2004 with dollars. But dependence on commodity exports, rising inflation, swelling bureaucracy and reduced welfare services continue to pose a significant obstacle to progress.