Senegal was populated at least 15,000 years ago. Wolof – and Serer people immigrated from the northeast around 500 AD, and Islamization was begun by the Almoravids in the 1000s. In the Middle Ages, the area was part of several large West African kingdoms, such as the Ghanaian Empire (700-1000s) and the Mali Empire (1300s). Senegal was colonized by France from the mid-1800s and remained French colony until 1958. In 1960, the country gained full independence.

Archaeological excavations indicate that there has been settlement in Senegal for at least 15,000 years. Several kingdoms have existed within the borders of today’s state, while parts of the territory were occasionally incorporated into the great medieval kingdoms of Ghana, Mali and Songhai.

Of great importance for the later development, the immigration of the Wolof and Serer people from the northeast was around 500, and the Islamization was carried out by the Almoravids of the 1000s. 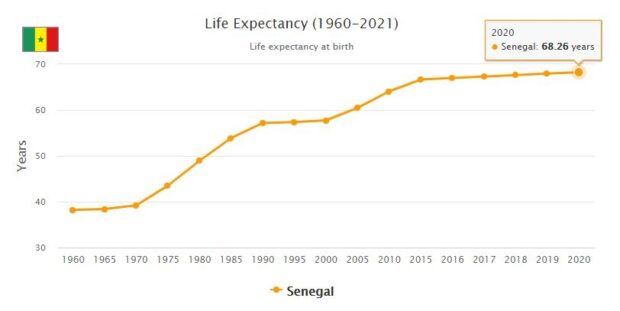 The Tukrur people settled on the Senegal River in the 8th century and established a kingdom that stretched across eastern Senegal from the 11th century, where wolof and serer petty states were incorporated into the new state formation. As the Tukhrur kingdom was weakened, parts of the country in the 13th century became subject to the Mali kingdom, and the Fouta Torob and Wolof kingdoms were established. See abbreviationfinder for geography, history, society, politics, and economy of Senegal.

The Wolof kingdoms succumbed to vast territories, further spreading Islam from the 1100s. They had their heyday during the period 1300–1600. One of its most important satellite states was Kayor, who in 1549 detached himself from the wolof and established his own independent state on the coast; Bawol did the same in 1555. At the same time, several states were formed by the Serbian people in the area, and parts of Senegal were incorporated into the Songhai Empire.

For centuries, there was extensive trade north to the Sahara, and the area was frequently invaded from Morocco, seeking to expand its influence and take control of the lucrative trade of gold and slaves, among others.

Portuguese seafarers discovered the area in 1444 and settled on the peninsula of Cap Vert and the island of Gorée, the following year also at the mouth of the Senegal River. The Portuguese established trading, and Portugal had a monopoly on the gold and slave trade until 1550. Also France, Netherlands and United Kingdom participated from the 1600s in trading on the Senegal coast.

Both Dutch and British occupied for short periods Gorée, and European powers shifted to control both this and other possessions, including St. Louis, founded by the French in 1659. The Dutch were closed out by the French in 1677, and the coast came under French control and in periods (1758–1779 and 1809–1816) also under the control of Great Britain.

The rivalry between France and the United Kingdom ended with the British gaining control of the Gambia enclave, while in the period 1840-1865 France established control over what became Senegal, both through the use of military power and political alliances.

The French colonization faced widespread opposition, especially from the area’s Muslims, who on several occasions went to Holy War – both to Islamize the local population and to the invaders. The Fouta Torob Empire was forced to accept peace under French conditions in 1858–1859 and was divided into four client states. Only in 1889 did France manage to defeat all resistance, with the exception of the southern part of the country, Casamance, where there was still resistance until the First World War. Control of Senegal, and above all the Senegal River area, was important for France’s colonial ambitions east of the Sahel, with control over Mali and Niger.

In 1848, St. Louis and Gorée were declared French municipalities, with the rights they entailed for the citizens, including the right to elect deputies to the French National Assembly. Unlike the rest of the population, they were considered French citizens, not subjects. In 1884 the municipalities of Dakar and Rufisque were established. Gorée became its own colony in 1854, ruled alongside Gabon, but incorporated in Senegal again in 1859. In 1904, Senegal was incorporated into French West Africa, with Dakar, the region’s best deep-water port, as its capital.

Senegalese soldiers participated in the French army in both world wars. During World War II, Senegal was first controlled by the Vichy government, which introduced forced labor. British and Free French forces bombed Dakar in 1942, and the colony was taken over by the Free French Government the following year. A new grouping, Bloc Africain, was established in 1943, and promoted demands for increased rights.

After the war, France was weakened and African self-awareness strengthened, and both nationalist demands and a pan-African movement emerged. In 1946, all the inhabitants of the French colonies were granted citizenship, with voting rights to the French parliament. One of the leaders of the Pan-African cultural and political movement was Léopold Sédar Senghor, a Senegalese poet who joined the French National Assembly in 1945 and 1948 formed the Bloc démocratique sénégalais (BDS, later Bloc populaire sénégalais, BPS).

The 1957 National Assembly election was won by the BPS, who joined with other groups to form the Union Progressiste Sénégalaise (UPS).

In 1958, Senegal became an autonomous territory (Republic of Senegal) within the French Union. In April 1959, the Mali federation was established between Senegal and French Sudan, becoming an independent state within the French Commonwealth in June 1960. When Senegal broke out in August 1960, the federation dissolved and the country became independent as a separate state on September 5; French Sudan became independent as Mali.

Leopold Senghor became Senegal’s first president, Mamadou Dia prime minister. Political disagreement and power struggle between these two led Senghor to take over as prime minister in 1962, when Dia was convicted of planning a coup. In 1963, a new constitution was introduced with strong presidential rule. At the parliamentary elections that year, UPS won a clear victory, after which other parties were either banned or joined with the ruling party. Senegal then developed into a one-party state, and in 1966 UPS became the only permitted party.

In 1976, a three-party system was introduced; Senghor’s own party was renamed Parti Socialiste (PS), and got a clear majority in the elections in 1978. Senghor was elected president, against Abdoulaye Wade of Parti démocratique senegalais Abdou Diouf (PDS). Later, a number of other political parties were allowed. Senghor resigned as president in 1980. The prime minister took office from January 1981, and was himself elected president in 1983, re-elected in 1988 and 1993, but lost to Abdoulaye Wade in 2000.

Despite temporary violations of political rights and democratic practices, and a period of one-party rule and suppression of political opposition, Senegal has been cited as an example of functioning political democracy in Africa – with a prime minister’s voluntary departure and subsequent democratic elections, as in 2000 also led to a shift in power from the ruling party to the opposition. Senegal has never experienced a coup or military rule either.

Senegal was the first country in sub-Saharan Africa to launch an economic structural adjustment program supported by the International Monetary Fund IMF and the World Bank. A program for the privatization of state-owned enterprises was implemented in the mid-1990s. In 1994, the currency, the CFA, was devalued by 50 percent, which led to riots and the approach between the government and the opposition.

The conflict in Casamance

In the southern province of Casamance, from 1990, an armed struggle was waged with demands for independence. In 2004, a peace agreement was signed between the government and the rebels in the Mouvement des Forces Démocratiques de la Casamance (MFDC). The MFDC claims that the colonial power France did not control Casamance and that the area thus did not belong to the Senegal state formation.

The rebellion also has an ethnic as well as economic background. The region’s diola majority has felt marginalized by the Wolof people, which is the dominant force in Senegal, and the province has been neglected by public investment. Casamance is also far from physically separated from the rest of Senegal, located between Gambia and Guinea-Bissau. The conflict is estimated to have claimed up to 5,000 lives, and tens of thousands have had to flee their homes.