In the 1470s, the islands, which were then uninhabited, were reached by Portuguese seafarers, and they became a colony in 1522. The Portuguese built sugar plantations and imported slave laborers from West Africa. Towards the end of the 16th century, sugar exports declined sharply due to excessive competition from Brazil. São Tomé and Príncipe then received their largest revenue as an intermediate station in the transatlantic slave trade. In the 19th century, the islands experienced a new economic boom since switching to cocoa and coffee production. To counter the demands of decolonization, Portugal made São Tomé and Príncipe an overseas province in 1951. However, protests against the Portuguese regime continued, and in 1972 formed resistance leaders in exile in the Gabon Movimento de Libertação de São Tomé e Príncipe (MLSTP) to lead the fight for Independent.

In 1975, São Tomé and Príncipe became independent with Manuel Pinto da Costa as president. The country then faced very big problems. Most of the Portuguese had emigrated in connection with independence, with devastating consequences for the business community. On the one hand, 10,000 citizens who lived in exile in Angola were forced to repatriate. The nationalization of the economically important cocoa plantations was a failure; production was halved and export revenues decreased. During the first decade of independence, São Tomé and Príncipe were a socialist one-party state with close contacts with Cuba and Angola. The trend has subsequently gone towards political pluralism, market economy and increased contacts with the western world. The MLSTP-PSD, which was previously the only allowed party now called, lost government power in the first free elections in 1991. See abbreviationfinder for geography, history, society, politics, and economy of Sao Tome and Principe.

The new government’s economic austerity measures proved very unpopular, and Parliament decided that the opposition should be consulted on all crucial political issues. In connection with this spread of influence, the people of Príncipe were granted local autonomy in 1994. In the elections to Parliament that year, the MLSTP-PSD regained power. After a period of unrest in 1995, caused by high inflation, which led to wage increases, a group of military forces took power in August and seized the president and the prime minister. After Angolan mediation, however, the coup makers gave up after less than a week.

Since the successful business leader Fradique de Menezes was elected president in July 2001, a new government was appointed without the participation of the MLSTP-PSD, after which the president dissolved the parliament and announced new elections. This resulted in a political deadlock and a disagreeable unity government. Parliament’s attempts to enforce a new constitution with diminished presidential power triggered a conflict with the Menezes, who refused to approve the proposal and announced new elections. After the government refused to resign and relocated its operations to the smaller island of Príncipe, the president agreed that the constitution should come into force but be subject to a referendum in 2006. However, this was not carried out.

In July 2003, soldiers backed by a small Christian Democratic Party carried out a new coup while the Menezes were abroad. Again, several members of government were arrested, but after mediation by several neighboring countries, the government regained power. São Tomé and Príncipe have since maintained independence close contacts with Portugal and the other Portuguese-speaking countries in Africa.

In 2006, the Menezes and Movimento Democrático das Forças da Mudança-Partido da Convergência Democrática (MDFM-PCD), who supported the president, won the parliamentary election. However, the political situation continued to be unstable and in 2008 a coalition government was formed with all parties except one represented. In the 2010 parliamentary elections, the still opposition party, the Acção Democrática Independente, won(ADI). The following year, former President Manuel Pinto da Costa returned as head of state after he won the second round of presidential elections. Both election results could be seen as an expression of dissatisfaction with the past decade’s rule, which was surrounded by corruption charges. ADI maintained and strengthened its grip on government power in 2014 since the party in this year’s election gained its own majority in parliament. In 2018, MLSTP-PSD’s Jorge Bom Jesus was named prime minister despite ADI becoming slightly larger in this year’s election. President since 2016 is ADI’s Evaristo Carvalho.

The probable occurrences of large oil and gas deposits on Saotomean territorial waters have increased the world’s interest in São Tomé and Príncipe during the 2000s. Due to its weak economic and political position, São Tomé and Príncipe have sometimes found it difficult to assert themselves against other states. For example, a cooperation agreement with Nigeria in 2000 on joint development of oil fields in the Gulf of Guinea was considered to disadvantage São Tomé and Príncipe and the agreement was renegotiated. No extraction has yet begun, but in 2019 an agreement was concluded between the two countries that gave the company Total E&P Nigeria the right to prospect in the area. 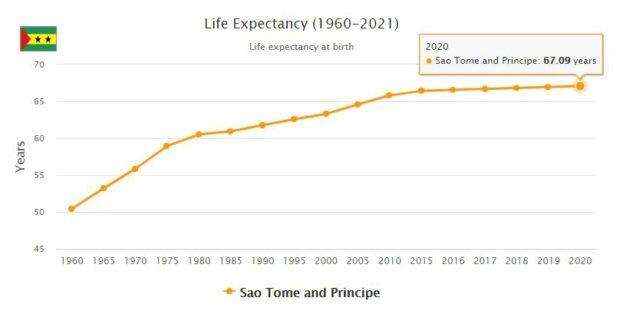