Congo’s earliest history is relatively unknown, and traces of early civilization in, for example, Pointe Noire, Brazzaville and the Niarid Valley cannot be safely attributed to any particular culture. The country’s first residents were pygmies. The Congo people immigrated during the 1300s, and the Congo was founded with its center in present-day Northern Angola. In 1482, Portuguese Diego Cão came to the mouth of the Congo River. To the north along the Atlantic coast was the Loan Kingdom, which had its heyday towards the end of the 17th century as an important center for the European slave trade. The tech empire, located east of Loango, also participated in the slave trade.

Rubber and palm products became important export products for the European market during the 19th century. Teke and Loango came under French rule since the agreement was signed in 1880 and 1883 respectively with the explorer Savorgnan de Brazza. In 1891 the French Congo colony was established, which in 1899 was leased to private concession companies. The colony changed its name to Middle Congo (Moyen Congo) in 1903, and it was in 1910 in French Equatorial Africa. The concession system had disastrous consequences for Congo’s natural resources and population. The French public was shocked by reports of forced labor and looting of the Congo, but the concession system was only abolished in 1935. See abbreviationfinder for geography, history, society, politics, and economy of Republic of the Congo. At that time, the investments were no longer profitable, and the French government lost money on the colony.

The infrastructure in the Congo was developed, among other things, because Brazzaville was the capital of the whole of French Equatorial Africa. The most important project during the interwar period was the Pointe Noire – Brazzaville railway, which is estimated to have cost 15,000 to 20,000 Africans. From 1945 to 46, forced labor was abolished, administrative reforms were carried out and the people of Congo were given the opportunity to elect representatives to the French parliament. Congo was declared autonomous republic within the French Commonwealth in 1958 and achieved full independence on August 15, 1960. Fulbert Youlou became the country’s first president, but was overthrown in 1963 after a period of unrest caused, among other things, by a stagnant economy. A military council took power and appointed Alphonse Massamba-Debat as president. The following year the Marxist was foundedMovement national de la revolution (MNR), which became the only allowed party. The MRC tied Congo close to the Soviet Union, Cuba and China.

A 1968 military coup brought Marien Ngouabi to the presidential post. The MRC was replaced in 1969 by the Parti congolais du travail (PCT), and the country adopted the name of the People’s Republic of Congo. After a series of failed coup attempts, Ngouabi was assassinated in 1977. Colonel Denis Sassou-Nguesso took power in 1979, and the same year a socialist constitution was introduced. In 1989, Sassou-Nguesso announced some economic and political liberalization. Political unrest in 1990 led to PCT being de-ideologised, new parties allowed to be registered and many political prisoners released. In 1991, free elections to the National Assembly were decided, and Congo changed its name to the Republic of Congo.

The democratic system was enshrined in a new constitution that was approved in a 1992 referendum. At the first parliamentary elections in June-July 1992, the Union received the panafricaine pour la demokratie social (UPADS) and the Mouvement congolais pour la demokratie et le developement integration.(MCDDI) both significantly more mandate than PCT. The two new parties also came to dominate the Senate, and in August UPADS leader Pascal Lissouba was elected president. Lissouba failed to realize its election promises to decentralize power from Brazzaville and to implement economic reforms. Since MCDDI and PCT formed an alliance with several other parties, they toppled the government and Lissouba must announce new elections as early as 1993. UPADS with allied small parties retained power, but political unrest continued and went into armed confrontation between the army and party-linked militia. In 1995, MCDDI was incorporated into the government and some militia groups began to be included in the army.

However, tensions rose again before the general elections to be held in 1997 when the government failed to implement any of the democratic and administrative reforms required by the opposition. When the army tried to disarm Sassou-Nguesso’s private military force, the “Cobras”, civil war broke out. Brazzaville was divided into three zones, ruled by militia loyal to Lissouba, Sassou-Nguesso and MCDDI leader Bernard Kolélas. The latter soon allied himself with Lissouba and was named prime minister. The fighting spread across the country, but since Sassou-Nguesso was assisted by Angolan army forces, he took control of Brazzaville and the port city of Pointe-Noire in October. Lissouba and Kolélas fled, and Sassou-Nguesso was able to re-declare himself president.

A reconciliation conference in 1998 was boycotted by parts of the opposition, and during the year the fighting continued sporadically, mainly in the Pool region around Brazzaville. Only at the end of 1999, the president’s forces had the situation under control, and the militias began to capitulate. The conflict had then cost at least 10,000 people their lives and made about 800,000 homeless. Large parts of Brazzaville were destroyed. In 2000, Koléla’s and former Interior Minister Philippe Bikinkita was sentenced in his absence to death for war crimes. In 2001, Lissouba was sentenced in his absence to 30 years of criminal work for high treason. Koléas was granted amnesty in 2005.

Parts of the opposition refused to participate in the work of drafting a new constitution, and all credible opposition politicians boycotted the presidential election that took place in 2002, shortly after the constitution was adopted in a referendum. As a result, Denis Sassou-Nguesso received almost 90 percent of the vote. The weeks after the presidential election sparked new unrest in the Pool region, after Kolélas Ninjamilis attacked the city of Kindamba. The unrest led to the May elections in the Pool region being canceled. After a second round of elections in June, the presidential party PCT stood as superior victor with 53 seats. PCT’s support parties were given 30 seats, while the betrayal of Lisbon’s UPADS party received only four seats. MCDDI was not represented at all in the new parliament.

After continuing fighting during the remainder of 2002 between the Ninjamilis and the army, mainly along the strategically important railway between Brazzaville and Pointe-Noire, a peace agreement was finally concluded in March 2003 and the militia agreed to be disarmed. However, unrest has flared up in the Pool region even later.

Sassou-Nguesso and PCT have remained in power through superior victories in elections that have been challenged by the opposition.

Sassou-Nguesso was re-elected in 2009 with 79 percent of the vote. Despite the opposition protests, the president in 2015 allowed a referendum on amendments to the constitution. The rule that said the president was only allowed to sit for two terms was removed, as was the age limit of 70 years. This made it possible for Sassou-Nguesso to run for office in the upcoming presidential elections, and he won 2016 with 60 percent of the vote.

In 2011, a law to provide legal protection for the country’s indigenous people came into force. The law is the first of its kind in Africa. 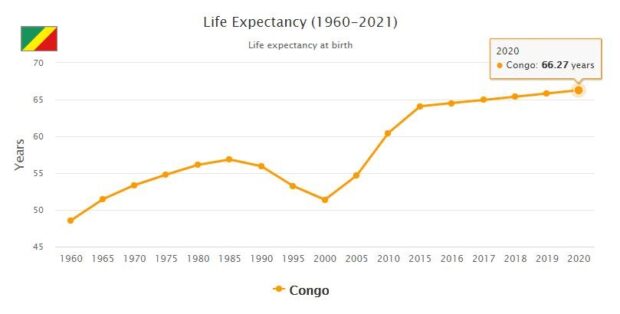