The area we know today as Namibia has historically been sparsely populated by hunter and sank cultures. From the 17th century onwards several groups migrated into the area, from the north came cattle drivers like nama and hereo. From the south came African speakers from the Cape Colony. In the 19th century, Germany claimed territory. The colonization of the Germans was very brutal, and during World War I the British conquered the area and left it under the South African Union.

Neither the League of Nations nor the heir UN accepted South Africa’s supremacy over South West Africa. In the 1960s, there was also an armed liberation movement in neighboring countries. The country first became independent in 1989. 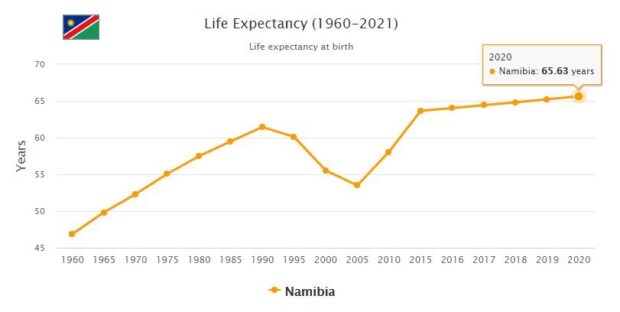 Relatively little is known about Namibia’s oldest history, but finds of more than 25,000-year-old cave paintings point in the direction that the San people were the country’s earliest inhabitants. The San people lived in ancient times throughout southern Africa, but were displaced north after the establishment of the Europeans in the southern part of the continent in the 1600s. See abbreviationfinder for geography, history, society, politics, and economy of Namibia.

Hunting and retreat were the basis of life for the wandering San people, who were gradually displaced by other immigrant peoples. First of these were the nomadic cattle people, nama, then damara, who ran both cattle keeping and hunting, as well as copper smelting. The heroes, who settled in the north-eastern and central parts of the country, also kept cattle and developed a nation with central leadership under a chief.

European states later showed interest in Namibia than most other territories in Africa, despite the fact that Portuguese seafarers landed on the Namibian coast as early as 1486 without establishing either trading stations or fortifications.

In the 1670s, Africans (residents) from South Africa explored parts of Namibia, and from around 1790 African traders and settlers came to the country, up to Etosha Pan and the Ovambo kingdoms. In the early 1800s, overlam Nama cattle raiders immigrated from the Cape Colony and established a state formation around Windhoek, led by Chief Jonker Afrikaner. Some time later, a group from Cape settled down south of Windhoek, later known as Rehoboth Basters. Movement of Namas to the north and gentlemen to the south caused armed conflict in central parts of the country.

In the 19th century, European missionaries established themselves in later Namibia; British and German in the south, Finnish in the north. The German missionaries agitated for annexation. European traders and hunters operated in the area, which in 1876 was placed under the British crown as a protectorate, and from 1884 administered as part of the Cape Colony. This led to the assumption that the United Kingdom would subjugate all of Namibia, as an extension of the Cape Colony. Nevertheless, at the Berlin Conference in 1884–1885, the area was awarded to Germany under the name German South West Africa.

In the years that followed, the German flag was raised in settlements along the coast from the Orange River in the south to the Kunene River in the north, with the exception of the whaling station in Walvis Bay. From 1885 Germany established a colony administration and entered into agreements with local leaders. In 1891, the Alte Feste fort was built in Windhoek, which then became the seat of German colonial rule, and later the country’s capital.

The German government in South West Africa was one of the most ruthless in colonial history. Between the establishment of the colony in 1885 and up to the turn of the century, 3000 German settlers arrived in the central highlands. Here they expelled the gentlemen from their traditional pastures.

The Nama people, led by Hendrik Witbooi, would not submit and were attacked by a German force in 1893-1894. This led to the Namas becoming the Allies of the Germans in a German divide and rule policy. In 1904, the heroes, led by Samuel Maherero, revolted. The commander of the German forces, General Lothar von Trotha, ordered the total extermination of the men’s men, who were killed during the Battle of Waterberg. Those who were not killed were driven out into the Kalahari desert, where many thirst and starve to death. Von Trotha’s forces continue to hunt for survivors in the desert, those trapped were put in labor camps, which were given the German term concentration camp – concentration camp. The mortality rate in these camps was very high, and the camps were a direct precursor to camps used by Nazis in Europe 30 years later.

The Nama people also eventually joined the rebellion. The Germans responded with the same strategy as above the heroes, Nama was chased, killed and banished to camp. 1800 of them were sent to Shark Island, a concentration camp outside the port city of Lüderitz, where up to 80 percent died. Including several of the rebellious leadership figures. Hedrik Witbooi was killed in 1907. Thus, opposition to the German government was in fact also suppressed, but occasional guerrilla activity continued until 1909.

Most researchers agree that the genocide of herero and nama was the first genocide of the 20th century. Around 100,000 people, mainly herero, were killed between 1904 and 1907. The descendants of herero and nama survivors have for several years sought compensation from the German state, which they have so far not achieved.

In practice, South West Africa was incorporated into the Union, South African legislation was introduced. Among other things, this meant that Africans could only live in specially reserved reserves and still serve as cheap labor for European agriculture and for mining companies, in line with the colonial system of contract work. Resistance from several African groups was, as before, defeated. About half of the German population was deported or voluntarily. Immigration of whites from South Africa was encouraged, and in 1925 the South African government gave the white residents of the territory limited self-government. In 1949, these were represented in the South African National Assembly.

In 1966, the UN General Assembly resolved to end the mandate so that the South African Republic no longer had the right to administer the country. The following year, the United Nations appointed a council to govern the country, which had little practical role as South Africa refused to hand over control of the territory, which from 1967 was given the name Namibia. In 1977, South Africa annexed Walvis Bay and the Penguin Islands, which were then administered as part of the Cape Province.

South African apartheid policies were also being introduced in Namibia, including through the creation of the bantustan. Although South Africa reportedly incorporated Namibia, Namibia became increasingly economically integrated with South Africa.