Montenegro’s history is characterized by the country’s geographical location close to more powerful neighboring states. In the Middle Ages, Montenegro was subject to the Byzantine (East Roman) Empire and then the Kingdom of Serbia. When the Serbian kingdom disintegrated in the 1300s, Montenegro became an independent principality.

In 1918, Montenegro became part of the new state of the Serbs, Croats and Slovenes, which in 1929 was named Yugoslavia. When Yugoslavia disbanded in 1992, Montenegro and neighboring Serbia formed the Federal Republic of Serbia and Montenegro.

In 2006, Montenegro declared itself an independent state. 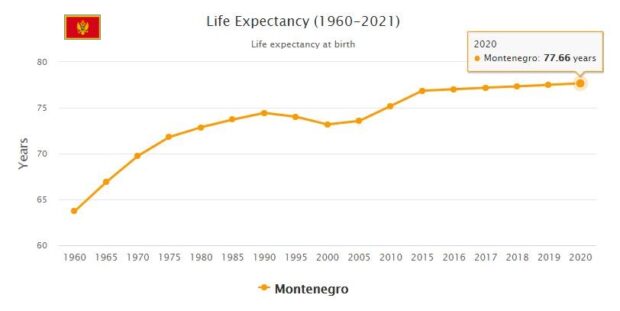 The area that is today Montenegro was originally populated by illiterates. See abbreviationfinder for geography, history, society, politics, and economy of Montenegro. In the 600s, the Illyrian population was displaced by slaves, who in the 900s became Orthodox Christians. The area eventually came under the Byzantine (East Roman) empire.

By the end of the 12th century, the Byzantine Empire lost control of the area and became part of the Kingdom of Serbia. When the Serbian kingdom disintegrated from the mid-1300s, Montenegro became an independent principality, which, in association with Venice, was in constant conflict with the Ottoman Empire.

Montenegro as an independently rich

Countries in Western Europe recognized Montenegro’s independence in 1878. From the 18th century, Montenegro was closely associated with the new Russian great power. With Russia’s help, in 1866 Montenegro gained access to the sea through a small stretch of land, and after making major conquests in the Russian-Turkish war, the country more than doubled at the Berlin Congress in 1878. Here, Montenegro’s independence was recognized.

In 1910, Montenegro was proclaimed a kingdom. The country joined the Balkan Federation in 1912, and King Nikita opened the Balkan War in 1912-1913 by declaring Turkey at war. During World War I Montenegro stood on Serbia’s side and became occupied by Austria-Hungary in 1915-1916.

In 1918, Montenegro became part of the new state of the Serbs, Croats and Slovenes, which in 1929 was named Yugoslavia.

Following the collapse of the Kingdom of Yugoslavia in 1941, following the invasion of the Axis during World War II, a kingdom was proclaimed in Montenegro. However, the board was taken over by an Italian governor. When Italy capitulated in 1943, the Germans took power until Montenegro was liberated by the Allies in the fall of 1944.

When Yugoslavia was organized as a federation in 1945 to solve the fragile nationality issue, Montenegro became one of the country’s republics and added several coastal cities. The country was thus given a long, continuous stretch of coast.

Towards the end of the 1980s, Montenegro’s Communist Party came into opposition to Serbia, and in 1989 Serbia’s President Milošević appointed Momir Bulatović as the new party leader. At the same time, the party was transformed into a socialist party according to the Serbian pattern.

When Yugoslavia finally disintegrated in 1992, Montenegro became Serbia’s only partner republic in the new Federal Republic of Yugoslavia (“Rest Yugoslavia”), which in 2003 changed its name to Serbia and Montenegro.

In the mid-1990s, Montenegro tried to distance itself from Serbia’s politics; parts of the opposition in Montenegro were far more separatist and demanded full independence from Serbia. Both in the cultural and religious spheres strongly advocated Montenegrin independence.

This was reinforced after Milo Djukanović took over as president in 1998. Prior to the 2001 election, he agreed to begin a full detachment process for Montenegro from Yugoslavia, but his partial alliance, Victory for Montenegro, received only 42 percent of the vote. Following the new union agreement, the prime minister’s position became the country’s real leadership position, and Djukanović became prime minister in 2003.

Djukanović believed that Montenegro would do better both economically and politically as an independent state than in union with Serbia. He also argued that an independent Montenegro would have better opportunities to join the EU. Montenegro would not participate in a joint election to a joint national assembly in 2005 and instead proposed the dissolution of the state federation. This was rejected by the Serbian Prime Minister Koštunica.

According to an agreement the state federation had with the EU, in 2006 a referendum was held in Montenegro on the detachment from Serbia. About 55 percent of the votes wanted a dissolution and Montenegro declared itself an independent state in June 2006.

In 2006, the ruling coalition won the election and Zeljko Sturanović took over as prime minister. Since independence, Montenegro has quickly become part of the international community. The country is now a member of the UN, NATO’s Partnership for Peace program, the World Bank and the International Monetary Fund.

The country applied for EU membership in 2008, and is currently recognized as a candidate country. Negotiations with the EU began in 2012.