Stone Age finds from both Paleolithic and Neolithic times have been found in the area that makes up today’s Mauritania. Located in the Sahel, between North Africa and sub – Saharan Africa, Mauritania has been inhabited by people from both the south and the north from a historical point of view. The ethnic and cultural mix has persisted, contributing to social and political tensions in modern times as well.

In the centuries leading up to the year 1000, the indigenous locals were forced south by Arabs and Berbers. It was within the present Mauritania that the Almoravids began their expansion around the year 1000, which led to their occupation during a period of parts of Ghana and Morocco. Caravan routes link Mauritania to Morocco, which later claimed the country as part of a Greater Morocco. 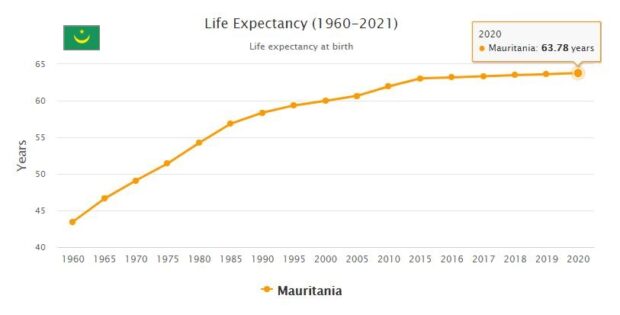 The first Europeans to arrive in the area were Portuguese seafarers in the 1440s. They established a fort in Arguin and were followed by Dutch, French and British. Increasing Arab immigration led to the emergence of an Arab-Berber culture, which eventually became the dominant Moorish culture and contributed to Arab politics towards the black peoples of the south. Several confederations were formed, both in the south, east and north, dominated by Moorish clans. See abbreviationfinder for geography, history, society, politics, and economy of Mauritania.

One reason for increasing contact with Europe was the slave trade, where local ruling groups conquered or bought slaves inland farther south, for sale to European buyers. France strengthened its interests along the coast beyond the 19th century, and in the early 1900s used both military power and protection to secure a foothold in what is today Senegal and Mauritania.

In 1909, a military campaign against colonization was wiped out. Mauritania was subject to French control within the Afrique Occidental Française, ruled from St. Louis in Senegal. In 1920 the area was given the status of a separate colony, but France did not secure full control of the interior until the mid-1930s. In 1944, the easternmost region, Hodh, was incorporated into Mauritania from today’s Mali. Mauritania then became French overseas territory in 1946, and elected a deputy to the French National Assembly. This led to the establishment of the first political parties.

In 1957, a government was elected, won by Union Progressist Mauritanian (UPM) and led by Moktar Ould Daddah. It was deployed when the country, with Nouakchott as its new capital, in 1958 became an autonomous republic within the French community. Ould Daddah then established the Parti du regroupement Mauritania (PRM), which included UPM and other parties – and which was without opposition to independence.

On November 28, 1960, Mauritania became independent as the world’s first Islamic republic under the 1959 Constitution and with Ould Daddah as the country’s first president. Mauritania’s political development as an independent state has been characterized in particular by three dimensions: the regional context, especially in relation to Morocco and Western Sahara; ethnic contradictions, which also have a regional dimension with widespread Arabization and discrimination of the African minority, and in general the absence of democracy and stability, with multiple military coups.

From 1960, Ould Daddah Mauritania moved in the direction of a one-party state, with the PRM as the center of power. He won the 1961 presidential election and rallied the country’s parties in the Parti du peuple Mauritian (PPM), which became the only allowed party after the constitutional amendment that introduced the one-party state. A radicalization of the regime took place in the 1970s, with an increased approach to the Arab world. Thus, the ethnic and cultural contradictions within Mauritania were sharpened, and stood between the ruling Moorish elite, the non-Arab population in the north and a black African population in the south.

These contradictions increased with the growing Arabization of the mid-1970s, where a key element was to replace French with Arabic as the official language. This led to riots that demanded more human lives and were further reinforced through social differences. Slavery was officially abolished only in 1980, but not abolished.

The war in Western Sahara

Another conflict that contributed to the political instability of the second half of the 1970s was Mauritania’s participation in the war in Western Sahara. When Spain planned to withdraw from its colony Rio Oro (Western Sahara) in 1975, an agreement was signed between Spain, Morocco and Mauritania for the two African states to share the colony. The international court in The Hague and the UN supported the local people’s demand for independence, but when Spain withdrew in 1976, Morocco and Mauritania occupied each part of the country. The occupation was met by armed resistance from the liberation movement Polisario, which also targeted targets in Mauritania, including the capital. In 1977, the government signed a joint defense agreement with Morocco, which stationed troops in Mauritania. After a ceasefire with Polisario until 1979, the war resumed until Mauritania withdrew its territorial claims in Western Sahara.

The war in Western Sahara had little support in Mauritania. It imposed heavy financial burdens on the country and contributed to the military coup which in 1978 toppled President Ould Daddah. The coup was led by Colonel Mustafa Ould Salek, who established a military council but was himself overthrown in a new coup in 1979, led by Colonel Lieutenant Ahmad Ould Louly. In 1980, Louly was dismissed by the Military Council and replaced by Colonel Lieutenant Mohamed Khouna Ould Haidallah, who briefly introduced civilian rule 1980–81, before reintroducing military rule.

In 1984 he was overthrown in a new military coup, led by Colonel Maaouya Ould Sid’Ahmed Taya. The reason for the coup was, among other things, opposition to Haidallah’s support for Polisario. Under the military rule, the constitution was repealed, the national assembly dissolved and political parties banned – this with growing dissatisfaction in the population. A resistance group, the Forces de liberation des africains en Mauritanie (FLAM), was established in 1983 with a base in Senegal to fight for the black Mauritanian situation. Another militant movement that fought Arabization and marginalization of blacks was the Front uni pour la resistance army of Mauritania (FURAM).

Taya initiated a process of political and economic change, with the gradual transition to civilian government from 1987. This year, the first elections since independence were held, where several parties were given the opportunity to make lists. In 1991, a new constitution was passed and a multi-party system was introduced. The first parliamentary election since independence in 1960 was held in 1992, won by the sitting regime with President Ould Tayas Party’s Republican Democrat and Social (PRDS). Ould Taya was also re-elected in 1997 and 2003 before being deposed in a new military coup in 2005, and a military council led by Aly Ould Mohamed took power.

Especially four countries are central to Mauritania’s foreign policy: the former colonial power France, neighboring Western Sahara and Senegal, and Morocco, which long claimed both Western Sahara and Mauritania. It was not least pressure from Morocco and other Arab countries that caused Mauritania to turn to African states further south, as well as to France, which was allowed to maintain a military base in the country until 1966.

With increasing Arabization from the mid-1960s, contact with the Arab world increased in the 1970s, with membership in the Arab League in 1973. Relations with France were similarly weakened. Mauritania introduced its own currency in 1973, to replace CFA (which was linked to French francs), and nationalized the French-controlled mining company Miferma. Mauritania joined in 1989 with four other Arab countries in the Maghreb Union, which eventually became paralyzed due to disagreements between Morocco and Algeria on the Western Sahara issue. In 2000 Mauritania resigned from the West African cooperation organization ECOWAS.

Only in 1970 did Morocco give up its territorial claim to Mauritania, as part of Morocco’s plan to take over the Spanish colony of the Spanish Sahara. Mauritania participated in the plan to divide the colony between Morocco and Mauritania, but after losing the war with the liberation movement Polisario, Mauritania chose to give up its demands, and in 1984 the country recognized the Sahrawi Arab Democratic Republic(SADR). This led to a temporary diplomatic break between Mauritania and Morocco. The relationship with Senegal was put to the test in 1989–90, when a conflict over grazing rights at the border led to diplomatic riots and concentration of refugees in both countries. Diplomatic relations were restored in 1992, but there were new contradictions around the year 2000; this time about exploiting the water reserves of the Senegal River.

The Tuareg conflict in Mali has to some extent affected relations between neighboring countries; Mali has accused Mauritania of giving orders to Tuaregs who have attacked Mali. The conflict contributed to demarcating the border between the two countries in 1993.

Mauritania supported Iraq during the 1991 Gulf War, and Iraqi civilian aircraft were parked in Mauritania during the war. Mauritania, after pressure from aid providers France and the United States, rejected Iraq’s desire to use the Mauritanian desert for rocket testing. In 1999, however, Mauritania broke off diplomatic relations with Iraq, after establishing full relations with Israel. The connection was criticized in the Arab world and led to temporary diplomatic rupture with Libya. Mauritania has accused both Burkina Faso and Libya of supporting forces that have undermined the country’s government.

After the terrorist attacks in September 2001 included the United States Mauritania in a belt of states from the Atlantic to the Red Sea that could be used by terrorists. Cooperation in the fight against terrorism was initiated, including with US training of the Mauritanian defense.