Malta was first colonized around 5000 BC of farming groups likely to come from Sicily; the oldest ceramic finds are identical to contemporary finds from the stentinello culture of the Syracuse region. Cultural development thereafter has a strong local character. In the next phase (c. 4,000 BC), kidney-shaped cult houses appeared as well as rock tombs, a tomb type that gradually gave a more monumental design.

Malta’s famous megalithic stone temple flourished around 3500-2500 BC At that time, more than a dozen megalith monuments were built and used, most in colossal format. The temples, which are evenly spread across Malta and Gozo, tend to appear in pairs. Among the most significant are the ntgntija (“Giants Tower”) on Gozo, whose façade is today preserved to six meters in height, the well-preserved sibling temples Ħaġar Qim and Mnajdra on the southern coast of Malta and Tarxia just south of Valletta. All exhibit a schematic, ritual ornament. Unique in its kind is the underground Ħal Saflieni, in which over 7,000 graves were found. The temple culture ceased abruptly and was replaced by a Bronze Age building that bears great resemblance to that of the eastern Mediterranean. 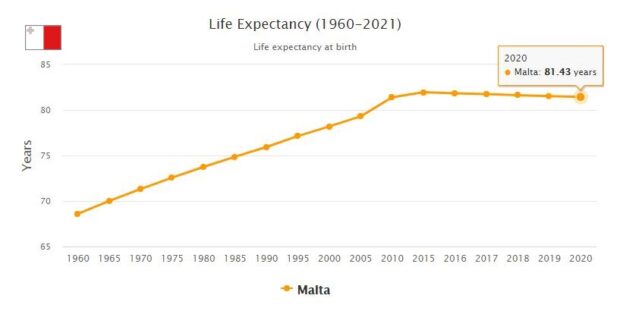 Malta (Greek Meliʹte, Latin Meʹlita) is little known from ancient sources, although it has sometimes been identified with the nymph Kalypso’s island of Ogygia in the “Odyssey”. See abbreviationfinder for geography, history, society, politics, and economy of Malta. The islands were colonized early by Phoenicians and arrived in the 500 or 400 BC. within Carthage’s sphere of power. The Romans conquered Malta in the Second Punic War in 218 BC and united it with the province of Sicily. The classic tracks are mainly a number of Roman villas. In the New Testament (Acts 28: 1-11), the apostle Paul’s stay in Malta is depicted after a shipwreck about 60 AD.

Malta was part of the Byzantine Empire from 533 until the Arab conquest of 870. The limited source material indicates an economic and cultural boom under Arab rule. The island was conquered in the early 1090s by the Normans who also controlled Sicily. The Normans were more ruling than colonizers, and Malta retained an Arab touch until the 1240s, when the Muslim population was expelled. From 1282 until the end of the Middle Ages, Malta belonged to the Aragonese royal house, and in the early 16th century Malta became part of the Spanish empire.

Under the Order of John

In 1522, the Turks attacked Rhodes and forced the Johannites to leave the island. The homeless knights received Malta in 1530 by the German-Roman emperor Karl V for a symbolic annual fee of a hunting falcon. The Christian Order Knights gradually transformed Malta into a heavily fortified base for naval operations against the Turks and against crusaders in the western Mediterranean. To stop them, the Turks tried – however in vain – to conquer the island in 1551 and 1565. Under the Johannite Order, Malta experienced an economic upturn, as the words invested the income from their properties in Europe in Malta, whose population increased from about 20,000 in 1530 to about 100,000 years. 1798. The latter year Napoleon occupied Bonaparte Malta, whose knight gave up without resistance and left the island. The harsh French rule led to a rise among the population,

Through the peace of Amiens in 1802, Malta was to be returned to the Order of Johannite, but the Maltese protested and demanded British protection. The United Kingdom therefore retained Malta, which by the Treaty of Paris in 1814 became the crown colony of the British Empire. In the 1850s, Malta became the headquarters of the British Mediterranean fleet, and after the opening of the Suez Canal in 1869, Malta’s strategic importance to the British increased as a hub on the sea route to India and the Far East via the Mediterranean.

Until the turn of the century, Valletta was an important transit port and coal bunkering station for commercial shipping. The economic boom under British rule contributed to a sharp increase in population, and in 1900 Malta had about 200,000 residents. Since so many people could not be sustained on the island, tens of thousands of Maltese were forced to emigrate to countries around the Mediterranean, after 1918 also to the United Kingdom, the United States, Canada and Australia.

During World War II, Malta was the most important Mediterranean base of the British. In Malta, light naval forces were based, and fighter aircraft were a constant threat to the Axis’s transport routes to North Africa from 1940-43. As a result, German and Italian forces, occasionally successful, tried to prevent British maintenance and British reinforcements from reaching Malta. In addition, Malta was subjected to intensive air strikes in 1941–42, but no attempts to enter the island were made. The lack of supplies and fuels that increasingly hampered the African Corps and contributed to the defeat of el-Alamein in October 1942 was a direct result of British combat forces in Malta causing major convoy losses. Malta was awarded the British Georgian Cross in June 1943, after it was announced by King Georg VI in April 1942.

From 1921 Malta had periodically limited self-government. By a constitution in 1947, the island gained internal self-government, and the workers’ party came to power. To solve Malta’s long-term economic problems, Prime Minister Dom Mintoff suggested that the island should be integrated with Britain and represented in the British Parliament. The proposal became the subject of a referendum in 1956, however, which was boycotted by the Nationalist Party. The result was that 75 percent of the voters but a minority of the population supported the proposal. As the British government imposed tough financial conditions for integration and the Catholic Church in Malta feared losing its privileges, the proposal was never implemented. Two years later, Mintoff resigned, and Malta was again placed under colonial administration until 1961.

After the 1962 election victory, Nationalist Party leader Giorgio Borg Olivier (1911-80) applied for Malta independently and was supported by the Labor Party. In 1964 Malta became independent. At the same time, a ten-year agreement was concluded on British financial aid and a British-Maltese defense alliance. After a rolling victory in 1971, Mintoff returned to power. He terminated the defense agreement with Britain and proclaimed a neutral, alliance-free foreign policy. In 1974 Malta was declared a republic. The British military base was closed in 1979, at the same time as Mintoff began a political approach to the radical Arab states of Libya and Algeria.

In 1987, the more Western power-oriented Nationalist Party returned to power. This led to a Western-oriented policy with a view to EU membership, but the process was interrupted by the Labor Party’s election victory in 1996. In 1998, the Nationalist Party regained power after winning a new election. The ideological differences between the Labor Party and the Nationalist Party decreased during the 1990s. In 2013, the Labor Party won the election after 15 years in opposition, and its leader Joseph Muscat (born 1974) became the new head of government. In the fall of 2019, demonstrations were held demanding his departure; Muscat was charged with obstructing the investigation into the murder of journalist Daphne Garuana Galizia (1964–2017), a scandal that led to the resignation of two members of government. Muscat was replaced as party leader and prime minister by Robert Abela (born 1977) in January 2020.

After a summit in the EU welcomed Malta as a Member State, in the spring of 2003, an advisory referendum on membership was held which, yes, won by little margin. Malta joined the EU in 2004 and introduced the euro in 2008 as currency.