Microlithic stone implements are found together with ground axes and ceramics from the 4000s BC. Guinea was probably a major center for the development of food production in West Africa; from the late 4000s, jams and palm oil probably dominated. Along the coast of Guinea, there are also chip tools and kitchen fittings from about 4000-2000 BC. found. 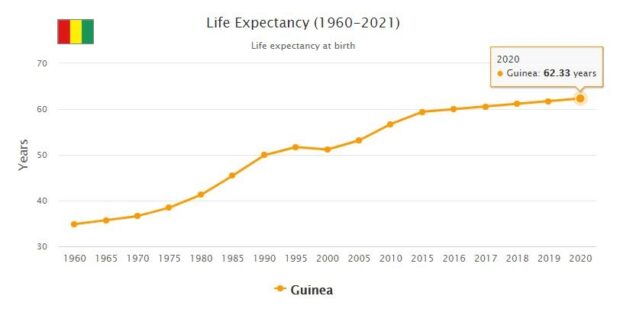 Guinea’s original population was expelled to the coast in the 7th century by immigrants, especially Susu and Malinke, who established the smaller kingdom in the interior of Guinea. See abbreviationfinder for geography, history, society, politics, and economy of Guinea. Around 1000-1550, the area was dominated by the great West African kingdoms of Ghana, Mali and Songhai. An extensive immigration of fulani took place from the 16th century.

The first Europeans came to the coast of Guinea in 1445. Portuguese mariners pulled Guinea into international trade with Europe, thereby strengthening the kingdoms on the coast. The European traders offered, among other things, alcoholic beverages, textiles and firearms in exchange for gold and slaves. Early in the 19th century French and British trading colonies were established on the coast of Guinea. In the interior of Guinea (Fouta Djallon) a Muslim Fulan kingdom emerged, which in 1725 started a holy war to convert the surrounding population. The kingdom was disbanded by internal strife and finally conquered by France. In 1895 Guinea was incorporated under the name of French Guineain French West Africa. The French colonial rule brought significant political and social changes. A solid state power and administration was established, and the school system was expanded. A local, French-educated elite emerged, and part of the earth was privatized. An export-oriented tropical agriculture was developed. At the same time, the majority population was oppressed, and opposition to colonial power grew.

In 1946, Guinea achieved French overseas territory. The Party of Democratique de Guinée (PDG) was established the following year, and under the leadership of Sékou Touré, the party fought for Guinea’s independence, which reached October 2, 1958. The relationship with France was severed, and almost all financial and technical assistance ceased. President Touré’s ideas of independent “African socialism” gave Guinea a special political role among the young African states. However, economic development went poorly; political oppression hardened and systematized. After 1960, several coup attempts were made against Touré, and a large part of the population fled the country from Touré’s dictatorial rule.

After Touré’s death in 1984, a military coup was conducted under the command of Officer Lansana Conté. The new regime liberalized the economy. Politics was also liberalized, but not in line with the economy. The military regime held on to power, sometimes hard-handed, and the promised transition to civilian multi-party system had to wait. After several postponements, presidential elections were held in December 1993. Despite accusations of electoral fraud, Conté was declared victorious even after the first round. It was not until June 1995 that parliamentary elections were held. The government party Party of l’unité et du progrès(PUP) gained a large majority, but the election was questioned by opposition parties and foreign observers. In general, after the introduction of the multi-party system, domestic politics has been characterized by frequent government transformations, party fragmentation and accusations against opposition leaders for stamping against the regime. Conté and PUP retained power in a series of later elections, all of which were strongly questioned.

The civil war in neighboring Liberia and Sierra Leone contributed to increased social and military concerns in the early 1990s. An armed uprising broke out in 2000 in the border areas of southeastern Guinea. The government blamed the Burkina Faso and Liberia regimes and the Sierra Leonean rebel movement RUF for supporting Guinean regime opponents. By the end of 2001, around 100,000 people had become homeless as a result of the fighting and several aid organizations were forced to discontinue their operations. Guinean flights attack rebel-controlled areas inside Sierra Leone. The fighting raised strong concerns about destabilization of the entire region, but weakened since the civil war in Sierra Leone had ended. However, the conflicts in Liberia and Ivory Coast led to continued problems with large refugee flows in southeastern Guinea.

Guinea became increasingly unstable in the mid-1990s, when President Conté’s failing health triggered a power struggle in both the military and political leadership ahead of his expected resignation. At his death in December 2008, soldiers under the command of Captain Moussa Dadis Camara took power in a bloodless coup. They formed a junta called the National Council for Democracy and Developmentand set up a civil-led but militarily dominated government. Since about 150 junta-critical protesters were shot dead by soldiers in September 2009, Guinea was subjected to harsh international sanctions. Dissatisfaction with the junta increased, and after Camara was shot dead in a murder trial in December 2009 and forced to seek care abroad, other members of the junta began to prepare for the return to civilian rule. The new junta leader Sékouba Konaté invited the civil opposition to appoint a prime minister for a broad unity government that would lead the country to new elections. Presidential elections in two rounds were held in June and October 2010 and ended with victory for the 72-year-old opposition politician Alpha Condé.

Condé’s party, the Rassemblement du peuple de Guinée (RPG), also won in the parliamentary elections that could ultimately be held in July 2013. The results in both elections were contested by the opposition, which is dominated by the former prime minister and the barely defeated second in the 2010 presidential election, Cellou Dalein Diallo and his party of the Union des forces democratique Guinea (UFDG). The contradictions have several times resulted in violent deaths. The 2015 presidential election was also characterized by violent contradictions between the government and the opposition. See also State Condition and Politics.

In early 2014, Guinea’s largest outbreak of ebola fever was discovered in Guinea, which spread to the neighboring countries of Sierra Leone and Liberia in the following months. Only in the second half of 2015 did we notice a significant slowdown in the number of new cases.

The epidemic has hit Guinea hard. In total, over 2,500 people have died due to the disease. The number of deaths in malaria also increased dramatically when the health care system was overloaded and people refrained from seeking help because of fear of being infected by Ebola fever. The country’s economy has also been hampered by the epidemic.