Guatemala’s history as an independent state spans almost 200 years. In contrast, this has been a conflicted and often bloody story that includes a brutal civil war in the 1980s. Before 1821, the country was part of a European empire. Before 1521, the area was the center of Mayan culture, one of mankind’s oldest state-forming traditions.

The oldest traces of people in Guatemala are after hunters and gatherers who lived in the highlands 20,000 years ago. Agriculture, and with its permanent settlements, originated somewhere in central Mexico about 7,000 years ago. Together with southern Mexico (the states of Chiapas and Yucatán), Guatemala constitutes the core area of ​​the Mesoamerican tradition that is now known as Mayan culture. Pollen found in Petén testifies to maize cultivation from the year 3500 BCE. Besides maize cultivation, Mayan culture is characterized by its complex calendar systems, a sophisticated writing system and pyramids and other stone monumental buildings. See abbreviationfinder for geography, history, society, politics, and economy of Guatemala. 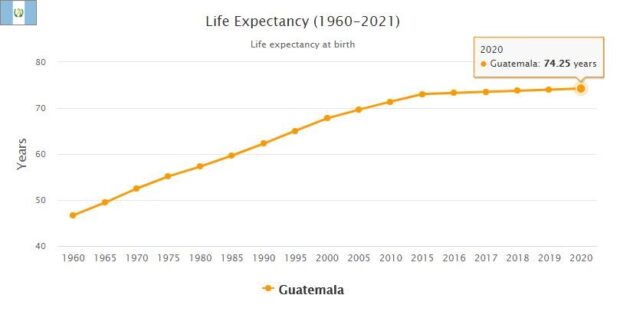 Archaeologists divide the Mayan culture into a pre-classical or formative era (2000 BCE to 250 BCE), classical (250–900) and post-classical (900–1520). Pre-classical or formative times are the period when the writing and calendar systems come into being, at the same time as ever-larger monumental buildings tell of political centralization. This occurs in close contact with Olmecian culture in Mexico and probably at the earliest in the lowland areas of the Pacific Coast and northeastern Petén.

The classic era is characterized by the fact that Petén is a tightly cultivated patchwork of competing city states or kingdoms. Tikal, which can house 70,000 people, was the largest. Statues and inscriptions tell of ruler dynasties and alliances with other cities as well as with the mighty city state of Teotihuacán in central Mexico. The inscriptions always contain references to dates and the great cosmic cycles that framed the rulers’ lives. The calendar system always gives two dates. One belongs to a 365-day solar year, the other gives a series of day names within a 260-day cycle (which probably corresponds to human pregnancy). The 260-day calendar is a divination calendar (tzolkin) still alive in Guatemala.

Around the year 800, Tikal and the other city states of Petén collapsed. However, the Mayan tradition continued in the highlands of Guatemala and Chiapas as well as in the Yucatán until the kingdoms in these areas were conquered by Spain in the 1520s. The ruins of the highlands are after the capitals of these kingdoms: Q’umarkaj (Utatlán on náhuatl) in the k’iche ‘realm and Iximulew in the kaqchikel realm. The four Mayan books that survived the Spanish fires are from this time. Pop Wuj, which was written down with Latin letters by scribbled k’iche’s around the year 1550, is in the same tradition of divination art and dynastic history.

The immediate causes of the collapse of the Petén kingdoms probably lie in a combination of increasingly intense wars between Tikal, rival Calakmul and their network of allies as well as ecological stress as a result of intensive agriculture and changes in rainfall patterns.

Two years after Spanish conquistadors landed in Mexico and conquered the Aztec Empire, Hernán Cortés sent his second in command Pedro de Alvarado to Guatemala. Alvarado had 420 Spanish soldiers as well as a few hundred Mexican army troops. Alvarado initiated negotiations with the kaqchikels against the k’iche before inflicting on the k’iche ‘prince Tekun Uman the decisive defeat outside Quetzaltenango on February 22, 1522. By then, diseases from Europe and Africa were alreadyabout to kill half the original population. Over the course of ten years, Spanish forces had defeated all local rulers in the highlands (as well as in present-day El Salvador and Honduras), including the kaqchicles. In the highlands of the north (Alta Verapaz), the q’eq’chí Mayans were brought under Spanish control of the Dominican Order, led by Bartolomé de Las Casas. Itzá, the last independent Mayan group in Petén, surrendered to Spain in 1697.

After moving the capital of its new colony a few times due to floods and earthquakes, Guatemala city was founded in 1541 where Antigua (‘the old’) now resides. Also this city was destroyed repeatedly before it was moved to where it is now located in 1776.

As a Spanish colony, Guatemala, together with Chiapas, El Salvador, Honduras and Costa Rica, constituted an administrative unit within the New Kingdom of the Viceroy of Mexico City. As elsewhere in the Spanish empire, indigenous people were Christianized and gathered in villages (reducciones). In fact, most Mayans continued to live in clan-based hamlets to go to their village on church and market days. This scattered settlement pattern characterizes the highlands to this day. The church financed itself by establishing sainthood (cofradía) which eventually became the largest and most important Catholic organization among indigenous peoples in Mexico and Central America.

Guatemala was not a rich colony. The terrain rarely allowed large goods and the mines were not particularly rich. The most important export income came from indigo cultivation. The distinction between Spanish speakers and Indians (as the indigenous peoples were called) was absolute and was maintained by the fact that each group had its own forms of governance (‘the two republics’). However, only those born in Spain (peninsulares) could occupy the top offices of the colony.

Independence in 1821 was the result of a wave of rebellion throughout Spanish America, inspired by revolutionary currents in Europe. The Creoles (Europeans born in America) objected to the Spanish monopoly on leadership positions in the colonies as well as on all trade to and from America. Representatives from the elites of the Central American provinces met in Guatemala City and proclaimed their independence on September 15, 1821. Few years earlier, k’iche ‘ leaders Atanasio Tzul and Lucas Aguilar had led a comprehensive tax protest against local highland authorities. In today’s Guatemala, Tzul (as well as Tekun Uman) is regarded as the precursors of the independent Guatemala.

The Central American elites were divided between liberals and conservatives in the view of how the new state should be organized. The conservatives were church-friendly, wanted a strong central power and were skeptical of free trade. The liberals did the opposite and also wanted a federation of the provinces of the region. The liberal program also included measures such as public education, secular education and a jury-based judiciary. Such radical program items also faced strong opposition among the Mayan people. In this game, Guatemala City was the conservative and church-friendly bastion.

After two decades of fighting between liberals and conservatives (as well as two years as part of the Conservative Empire of Mexico, 1821-1823), the federation finally fell apart in 1841. Chiapas then went to Mexico.

From then on, Guatemala entered a peaceful but stagnant period based on an alliance between conservative families in Guatemala City, the church and warlord Rafael Carrera (1814-1865). Carrera, who was of poor Mayan genealogy, was the man who added to the Liberals the decisive defeat. He emerged as a protector of the Mayan people and used their support and military talent to defeat Quetzaltenango when the liberal elite in the city proclaimed his own state in 1838 (Estado de Los Altos).

In 1867, a liberal uprising broke out in Quetzaltenango. It was led and won by General Justo Rufino Barrios (1835-1885). As president, Barrios carried out the liberal revolution in Guatemala by expropriating land from Mayan villages in areas suitable for coffee growing. The land was handed over to the general’s federal allies or sold to immigrants from Europe (including German colonists in Alta Verapaz). At the same time, duties were imposed on the Mayan goods. This plantation economy forms the basis of the extremely uneven distribution of land that is constantly affecting the country.

For Barrios, land reform was part of the modernization of Guatemala. Parallel to the transformation of the Mayan community, the church’s power was also severely curtailed and general, secular schooling was introduced. Guatemala City underwent significant renewal, a national police and prison system was established and the country received telegraphs and railways. Finally, Barrio’s great foreign policy ambitions for a new Central American Federation brought the country into a series of regional battles, including Mexico and the United States.interfered. Barrios lost his life on the battlefield in El Salvador in 1885. A few years later, the power of his nephew José María Reyna Barrios (1854–1898), who continued what is often referred to as ‘the liberal dictatorship’.

At the same time as the coffee economy cemented old social divisions, the income from this laid the foundation for a modern state and an emerging industrialization. Administration and infrastructure were developed based on European progress belief (positivism). The Mayans and their traditions were increasingly identified as reclining.

Reyna Barrios was assassinated in 1898 and followed by the increasingly tyrannical Manuel Estrada Cabrera (1857-1924). The novel Mr. President, with whom Miguel Ángel Asturias won the Nobel Prize, provides a relentless portrait of a paranoid ruler who ruled the country for 22 years. At the same time, Cabrera provides the first licenses to grow bananas on the Caribbean coast and railroad construction to the United Fruit Company from the United States. Thus, Guatemala is further absorbed into the world economy, based on exports of large commodities produced.

Throughout the 1920s, the liberal elite continued to rule, partly through coup and partly through elections, until the crackdown on world trade in 1929 sent prices of raw materials to the bottom. In 1931, Jorge Ubico Castañeda (1878–1946) was elected as the only candidate for new president in a country in crisis.

At a time marked by fascism and authoritarian state leadership worldwide, Ubico’s regime is becoming increasingly dictatorial. The regulations that mandated Mayan public work (road construction) if they had not worked long enough on a property, as well as giving landlords the right to punish day laborers, have remained as scary examples. At the same time, he was personally corrupt and created the country’s national audit.

In 1944, Ubico was overthrown after extensive protests. The military junta who took over organized the first reasonably democratic elections in that all reading and writing men could participate. Teacher Juan José Arévalo (1904-1990) won 86 percent of the vote. He was succeeded by captain of the army, Jacobo Árbenz, in 1950.

The ten-year period between 1944 and 1954 is known as the ‘Revolution’. Arévalo and Árbenz initiated a series of reforms to modernize the economy and society. However, the attempt at land reform challenged both domestic landlords and foreign financial interests; especially the American capital that owned the banana plantations and the railroad network. The landowner elite and the Catholic Church saw land reform as communism. This was during the Cold War and the United Fruit Company had close ties with the US political leadership.

In 1954, Árbenz was overthrown by a rebel movement (MLN) led by Colonel Carlos Castillo Armas (1914-1947), with extensive US support. His reign began the period known as the ‘Counter-Revolution’ when the reforms of the Revolution were rolled back, first under Castillo Armas and then under Miguel Ydígoras Fuentes (1895-1982). This did not happen without resistance. In 1960, two officers, Marco Antonio Yon Sosa (1929–1970) and Luis Turcios Lima (1941–1966), began a rebellion that was quickly defeated, but at the same time added the spiers to the guerrilla movements that developed in the decades that followed. Sosa and Lima had resorted to weapons in protest of Ydígoras’ close cooperation with the United States to overthrow Fidel Castro (invasion of the Bay of Pigs). Now the two refugees were just searching Cuba, and with Cuban help, the Guatemalan Communist Party created an armed faction – the FAR.

Between 1962 and 1968, FAR led guerrilla war in the highlands of the east, but with the help of the United States, the army won the fighting. At the same time, the army was gaining more and more state power by manipulating electoral processes, perhaps most obviously in 1974 when MLN’s candidate, Norwegian-Guatemalan officer Kjell Laugerud García, defeated Christian Democrat Efraín Ríos Montt. From then on, several other Marxist-Leninist insurgency movements (ORPA and EGP) also sought to establish ‘liberated territories’ as a first step towards a socialist revolution, such as in neighboring Nicaragua.