Very little archaeological work has been done in Gambia. In Western Africa, evidence of the finding of such old stone tools as in East Africa has not been accepted (compare Olduvai Gorge), and materials found on the slopes of the Gambia River have recently been reclassified as Neolithic. However, finds of paleolithic artifacts have been made in gravel from the upper Gambia river. Manufacture of microlithic tools from Late Stone Age is known from nearby areas of Senegal. The Senegambian region may have been the site of early domestication of the African rice. The introduction of the Iron Age seems to have been delayed by the middle of the first millennium AD. 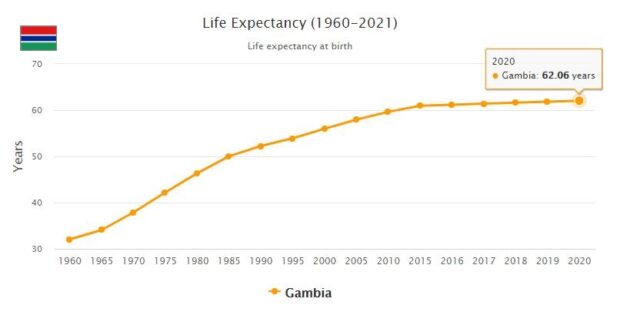 From the 13th century to the end of the 14th century, the present Gambia was part of the Mali kingdom. See abbreviationfinder for geography, history, society, politics, and economy of Gambia. In 1455, the Portuguese discovered the Gambia River, and soon traders, gold miners and slave hunters arrived in the lower Gambia. However, in 1588, the Portuguese handed over the commercial rights to English merchants. During the 17th and 18th centuries, the British tried to develop trade relations in the area, but ended up in repeated conflicts with the French, who had established themselves on the north side of the Gambia River at Albreda in 1681, opposite the British Fort James. It was not until 1783 that the British secured the rights to the Gambia River, and France was granted the Albreda enclave.

The town of Bathurst (now Banjul), founded in 1816 at the outlet of the Gambia River, became a British naval base, and from this it was checked that slaves were not shipped via the river since Britain banned the export of forced labor. Traders who established themselves in the city started an extensive export of peanuts. The city became subordinate to the British colony of Sierra Leone in 1821. The French enclave of Albreda eventually became British in 1857, but a number of territorial changes took place during the period 1823–53. During the 1870s, the British tried several times to exchange Gambia for French possessions in French West Africa, but opposition from both Gambia’s own residents as well as British traders and politicians prevented the exchange. French expansion in Senegal restricted the British territorial rights in the Gambia, and in an agreement in 1889, the British could secure only a narrow strip of land along the Gambia River shores. The Gambia became British protectorate in 1894 and was separated from Sierra Leone.

In 1906 slavery was abolished, and the Gambia experienced a period of peace. From 1948 political parties arose in the colony, which became autonomous in 1960. The Gambia gained full independence on February 18, 1965, and in April 1970 the country was declared a republic. Gambia’s first president became Dawda Kairaba Jawara. A coup attempt in August 1981 was defeated with the help of Senegal. In 1982, Senegal and the Gambia joined the Senegambia State Federation, which was dissolved in 1989. It was replaced by a friendship and cooperation agreement in January 1991.

During Jawara’s twenty-four-year term as president, Gambia came to be regarded as a successful liberal democracy in Africa. It had multi-party systems, elected parliament, independent courts, free press and a police force that was there to help the public rather than oppress it. African human rights and democracy organizations were located in Banjul.

On July 22, 1994, Lieutenant (later Colonel) Yahya Jammeh led a military coup that forced Jawara into exile. The coup was motivated by the earlier regime being corrupt. The Gambia leadership was taken over by a provisional military council headed by Jammeh. The previous government was dissolved, the constitution was repealed, all political parties were banned and the press was carefully monitored. The death penalty, which had been abolished under Jawara’s regime, was reintroduced. Jawara was indicted in his absence for embezzlement of state funds, and his assets in the Gambia were confiscated. Immediately after the coup, Gambia was ruled solely by military, but since then several changes have occurred in the regime’s composition and from 1995 a majority of the ministers have been civilian.

In 1996, a new constitution was adopted, and it was decided that presidential elections should be held that year. In August, political parties were again allowed, with the exception of the three who dominated during Jawara’s time. At the same time, Jammeh issued a decree prohibiting holders of high political posts from holding public service for the past 30 years. After a short election campaign, Jammeh was elected president, having previously requested leave from the army. However, the election procedure was called into question, and several people were killed and injured in unrest before the election. However, the parliamentary elections that were held in January 1997 were considered to have been successful and resulted in an overwhelming victory for Jammeh’s Alliance for Patriotic Reorientation and Reconstruction (APRC) party .

In 2001 the restrictions for the old parties were lifted, but some individuals, including Jawara, were still banned from political activities. However, Jawara was later pardoned by Jammeh and was able to return to Gambia in 2002. A new presidential election was held in October 2001 and preceded by clashes between military and opposition supporters. Despite a series of opposition parties casting veteran Ousainou Darboe as joint presidential candidate, Jammeh won by close to 53 percent of the vote. Immediately after the election, security forces seized up to 60 opposition politicians, most of whom were, however, released after a short time, partly as a result of pressure from foreign human rights groups. The situation remained tense and the parliamentary elections in January 2002 were boycotted by most opposition parties.

Jammeh’s regime has been shaken several times by corruption revelations. In October 2003, a campaign against corruption was launched, which led to the arrest of several people with high government services. Independent media reporting on misconduct have often been shut down on the regime’s orders and the responsible editors have been arrested. In 2004, one of Gambia’s most famous journalists was murdered, The Point’s editor-in-chief Deyda Hydara, who criticized a new media law according to which upsetting reporting can be punishable by up to three years in prison.

Also in the 2006 presidential election, Jammeh was challenged primarily by the United Democratic Party (UDP) Darboe. However, Jammeh was re-elected with just over 67 percent of the vote against Darboe’s just under 27 percent. The election itself was judged by international observers to be correct, but it was pointed out that events prior to the election could have affected the outcome. Among other things, most opposition-friendly media were forced to close. In the parliamentary election the following year, only about 42 percent of registered voters voted. APRC again won an overwhelming victory and received 42 seats.

The 2011 presidential election was judged in advance by the West African collaborative organization ECOWAS. Conditions for a democratic election were not considered to exist in a country where the media was largely controlled by the state and opposition and voters were under threat. The result of the election, where Darboe again came second, was that Jammeh was re-elected with 71.5 percent of the vote.

Over time, President Jammeh began to act increasingly eccentric. He wanted to be titled his Excellency President Sheikh Professor Alhaji Doctor Yahya Abdul-Azziz Jemus Junkung Jammeh Naasiru Deen, claimed to be able to cure HIV / AIDS, among other things, and arrested hundreds of people accused of being “witches”. Chiefs loyal to the president have run a campaign to crown him king. His rule became increasingly authoritarian and political opponents and human rights activists were harassed.

A peaceful change of power seemed possible after the presidential election held in December 2016. Jammeh then lost to opposition candidate Adama Barrow, who got 43 percent of the vote against Jammeh’s 40 percent. To the surprise of many, Jammeh, who then ruled the country for 22 years, admitted defeat. Jammeh, however, soon withdrew from his earlier statements and instead of accepting the defeat, he demanded that the Supreme Court annul the election. Jammeh’s term of office expired on January 18, 2017. Under the threat of military intervention from battle-ready and numerically superior ECOWAS forces, he finally gave up January 21 and went into exile in Equatorial Guinea. Two days earlier, Barrow swore the presidency at the Gambia Embassy in Senegal.