When Germany’s offensive against the Soviet Union began in 1941, German troops also invaded Estonia and instituted a terrorist regime. The Soviet first recaptured the Baltic States in 1944. The Russians initiated forced industrialization and forced collectivization of agriculture. The same “development model” Stalin had implemented in the Soviet Union since 1929. Around 80,000 Estonians emigrated to the West and this, together with the Russian colonization, helped to change the traditional ethnic composition of the population.

About 20,000 esters were deported in 1945-46, and the third wave of forced deportations took place in 1949, when about 40,000 were sent to distant parts of the Soviet Union. These were predominantly peasants who opposed the forced collectivization carried out by the Soviet authorities.

When Leonid Brezhnev’s term as Soviet leader was played out in the early 1980’s, various opposition movements emerged in Estonia: Democracy Movement and Estonian National Front. And there appeared opposition papers like the Democrat.

In 1985, Mikhail Gorbachov took power in the Soviet Union, and his Glasnost (openness) policy stimulated social and political activity – also in Estonia. In August 1987, a demonstration in Tallinn demanded the publication of the secret supplementary protocols of the 1939 German-Russian Non-Attack Pact. In parallel, the same requirement was imposed in Latvia and Lithaun.

In January 1988, former political prisoners formed the Estonian Independence Party. It was to fight for self-government in the country, reintroduce multi-party rule and introduce Estonian as official language. Another group, the Society of Estonian Heritage, was formed to preserve the nation’s historical monuments.

In April of that year, nationalists and communists formed the Estonian People’s Front and organized a demonstration in June 1988 with the participation of 150,000 people. Here the country’s flag appeared for the first time since 1940. In September, a similar demonstration was held with 300,000 participants, and a few days later the ban on the Estonian flag was lifted.

The People’s Front held its first congress in October, confirming the demand for autonomy and asking Moscow to recognize that the 1940 superpower had occupied the country by force. The following month, the Estonian Supreme Soviet (parliament) declared that it had supremacy in the country (not Moscow) and that it would veto laws passed in Moscow without its consent.

In August 1989, about 2 million Esters, Latvians and Lithuanians formed a human chain that was more than 560 km long and stretched from Tallinn to Vilnius. The requirement was recognition of the independence of the Baltic States. In February 1990, a convention of Estonian representatives adopted the country’s declaration of independence on the basis of the 1920 Tartu peace treaty between the Soviet Union and young Estonia.

At the May 1990 elections, the People’s Front and nationalist groups gained an overwhelming majority in parliament. Nationalist leader Edgar Savisaar was appointed to head the first elected government since 1940. In August, Parliament declared the country’s independence, but Moscow refused to recognize the declaration. 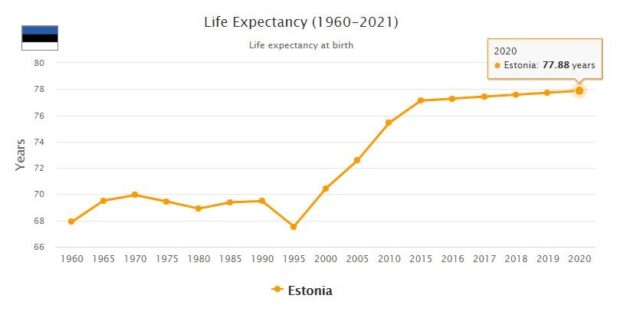