Costa Rica is located both geographically and culturally between the high cultures of Mesoamerica and the Andean region. Traces of Paleo-Indian hunters testify to settlement 9000–7000 BC As in other parts of southern Central America (Lower Central America), the chiefdom of ceramics as well as metal crafts and crafts of stone and gold were developed here before the arrival of Europeans. Costa Rica received cultural influences and migrations from Mesoamerica and South America. The Swedish Carl V. Hartman performed epoch-making archaeological excavations in Costa Rica in the 1890s. See also Central America (Prehistory). 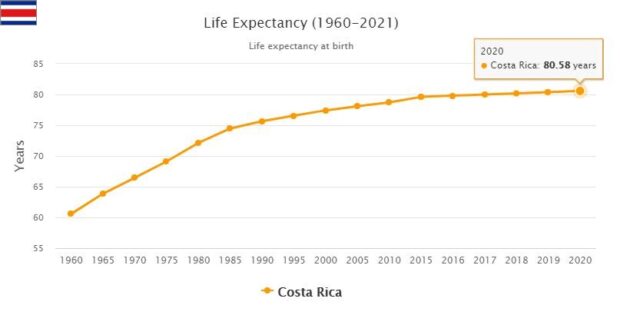 The first Europeans arrived in Costa Rica in 1502 with Columbus’s fourth and final voyage. See abbreviationfinder for geography, history, society, politics, and economy of Costa Rica. Despite the name Costa Rica, which means ‘the rich coast’, the country became one of the poorest parts of the Spanish colonial empire. The Native American population was neither numerous nor particularly developed, no significant mineral deposits were made, the terrain was difficult to reach, and the distance to more important Spanish possessions great.

Costa Rica was developed as a community of poor Spanish small farmers with scarce contacts with the outside world. This poverty made the area an unusual colony, without large goods but in return egalitarian and ethnically homogeneous. In 1564, the first permanent city, Cartago, was formed. Other cities, such as San José, were first built in the 18th century on the pleasant Meseta Central. In the early 1800s, Puntarenas, the first city on the Pacific coast, was founded.

Coffee exports, which took off in the 1840s, began a period of rapid economic expansion. The population grew, the fertile land at Meseta Central was increasingly used, the cities developed and some social differentiation arose. However, communications were a major problem, and the Atlantic coast was poorly developed. Railway construction began in the 1870s and became of central importance.

The first train between Cartago and the port city of Limón on the Atlantic coast went in 1890. The foreign entrepreneurs who built the railways were given large amounts of land and other privileges. Minor C. Keith built significant banana plantations in the Province of Limón, and Costa Rica soon became the world’s leading banana exporter. The workforce came mainly from Jamaica and gave rise to a black minority on the Atlantic coast. Costa Rica’s relatively equal social structure already led to a political development that was much calmer in the 19th century than in the rest of Latin America.

During the 20th century, the country was ruled democratically with the exception of shorter periods. Political life, which until the 1930s was characterized by the struggle between conservatives and liberals, then changed in the social reformist direction. Economic instability and social unrest paved the way for a new radical party, Partido Nacional Republicano (PNR), which won the 1936, 1940 and 1944 elections.

The 1948 election led to a brief civil war, when the ruling PNR refused to surrender power to the victorious opposition candidate Otilio Ulate. The uprising, led by José Figueres, succeeded but about 2,000 people perished, making the episode the bloodiest in Costa Rican history. The army was dissolved, the Communist Party was declared illegal, a new constitution was adopted (1949), women were given the right to vote, blacks were granted full status and new social and economic reforms were implemented. Figueres, who became extremely popular, formed the Partido de Liberación Nacional (PLN) and was elected president in 1953 and 1970.

Costa Rica has remained a country characterized by political stability and moderate social reforms. Smaller parties on the left, including the Communists, have been allowed since 1970. The economy entered a critical period at the end of the 1970s, caused by large external debt, growing inflation, significant trade and budget deficits and falling export prices. The economic situation caused harsh and unpopular austerity measures.

In the early 1980s, the government implemented large savings in public finances, but the economy did not pick up and foreign debt grew. In the late 1980s, Costa Rica sought the support of international lenders demanding further economic reform, which led to major protests against the policies pursued.

Central America was characterized by instability during this time as a result of the civil wars in El Salvador and Nicaragua. Costa Rican President Oscar Arias devoted much effort to brokering peace in neighboring countries when he considered that the conflicts were one of the causes of the economic crisis in the region. In 1987, Arias was awarded the Nobel Peace Prize for her commitment.

The economic reforms began to produce results in the form of increased growth, falling inflation and reduced foreign debt, but at the expense of social initiatives. Poverty increased, living standards dropped and the social safety net was largely dismantled. The combination of a weak economy and family dynasties within the established parties led to growing dissatisfaction with the political establishment. Voter participation declined, protests increased and new political movements were formed to challenge the two-party system.

Dissatisfaction was compounded when several corruption scandals were revealed. In 2004, the presidents Miguel Angel Rodríguez and José Figueres were indicted and convicted of receiving bribes from private companies. In 2006, former President and Peace Prize laureate Oscar Arias was re-elected with the hope of being able to wash away the sunny stamp the country received following the corruption scandals. Arias made new investments in welfare programs and pushed through a free trade agreement with the United States by a small margin.

In 2010, Costa Rica got its first female president through PLN candidate Laura Chinchilla. She continued in principle the same liberal economic policies as her representative, but after the government suffered multiple corruption scandals and Chinchilla failed to implement a promised tax reform, both she and the party lost a lot in public opinion.

In April 2014, Luis Guillermo Solís was elected President of the Citizens Action Party (Partido Acción Ciudadana, PAC). The PAC was formed by defectors from PLN who were dissatisfied that the party was moving too far right on the political scale. Solís promised a clean-up in the state apparatus to tackle corruption and an economic policy with a clearer social profile. However, his party PAC has only 13 of the 57 parliamentary seats and therefore needs the support of its former party colleagues in the PLN, which remains the largest party.

However, the PLN formed an alliance with other opposition parties and managed to take control of several important committees in Parliament as well as the post of President. A growing budget deficit and increased government debt prompted President Solís to try to push through a tax reform, which was also called for by the opposition, but the parties nevertheless failed to agree on the reform.

By the end of his term, support for Solí’s popularity had dropped significantly. Prior to the 2018 presidential election, PLN’s candidate was considered a favorite. In the first round, surprising Fabricio Alvarado Muñoz from the Christian Conservative Party National Restoration Party, PRN, received the most votes with 25 percent. His support is linked to a debate held in the country after the Inter-American Court of Human Rights, headquartered in Costa Rica, provided support for same-sex marriage which upset many Catholic voters.