Thanks to tourism and the export of diamonds, which made Botswana the second largest exporter in the world after Russia in the 1990s, the country achieved a surplus of state finances which, after all, could not solve the most pressing of the population’s problems. In 1998, 30% of the adult population was HIV positive. In February of that year, an attempt by the Government of Botswana to buy Belgian weapons, Germany , forced to make vigorous efforts to prevent this arms trade. Two years earlier, Germany had blocked a arms deal between the Netherlands and Botswana. Despite these obstacles, Gaborone appears to be keen on acquiring weapons in the near future. See abbreviationfinder for geography, history, society, politics, and economy of Botswana.

The internal conflict in Namibia in the Caprivi strip – a 460 km long corridor that in some places is only 30 km wide – also affected relations with Botswana. In January 1999, 2000 Caprivi residents sought refuge in Botswana. Many of these were separatists and the decision to grant them asylum therefore worsened relations with the government in Windhoek. In addition, both countries have an unresolved border dispute over an island in the Chobe River.

The October 1999 elections once again gave the victory to BDP, winning 33 of the 40 seats that could be filled by direct elections. The party’s candidate, Festus Gontebanye Mogae, was also confirmed at the presidential post he had taken over when Masire resigned in 1998.

After Kenya and South Africa took steps to import HIV drug replicas, the international pharmaceutical groups began selling their drugs at a discount to Botswana – the country in the world with the highest HIV infection rate: 1 in 3 people. At the same time, the national diamond company, Debeswana, began to support its employees and their wives in the purchase of HIV/AIDS medicines. Debeswana is jointly owned by the state and the South African diamond company de Beers. Nevertheless, the lack of a suitable health infrastructure, the lack of doctors, nurses and consultants has made it difficult to stop the spread of the infection and the treatment of the already ill.

After depriving them of water and food, in March 2002, the government relocated the last 2,200 members of the San people from the areas they have inhabited for 30,000 years. Over the past 17 years, 50,000 bushmen have been relocated to 63 camps to force them to abandon their nomadic existence. Kalahari which is the San people’s traditional habitat is rich in diamonds. Acc. Botswana’s legislation has no right to the underground resources, although they live in the areas where the resources are extracted.

After many years of struggle on the part of the various minorities, the government in 2003 decided to remove the discriminatory Articles 77, 78 and 79 from the country’s constitution. The President declared that the purpose was to promote unity, cultural diversity and create a better nation.

In September 2003, Botswana initiated the construction of a fence along the Zimbabwe border to curb the flow of illegal emigrants fleeing political and economic turmoil. The government estimates that up to DKK 1 million Zimbabwe nationals live illegally in Botswana.

In May 2004, WHO highlighted the advances in the treatment of AIDS/HIV in Botswana, Thailand and Brazil. In its report, WHO highlighted that over 20 million has died from the disease in the world, 34-46 million are infectious carriers and that 2/3 of these live in Africa.

In August, 1,000 miners from the diamond company Debswana Diamond Company were fired after conducting a strike known illegal by the government and where workers demanded higher wages. Botswana Workers Mine Union demanded a 16% pay rise and 24% bonus in 2004-05. Debswana fought against, arguing that they were already the best-paying company in the country. It also emphasized that the workers also receive housing, health care and free transport as well as support for the payment of drinking water. The mining union brought the dismissals to court as illegal.

In May 2005, the government refused to repeal a rarely used draconian national security law that is otherwise rarely applicable. This was done with reference to the US ‘fight against terror’. The Institute of Mass Media in Southern Africa had otherwise characterized the law as an obstacle to access to information and freedom of the press. The law was from 1986 and was originally introduced in response to the aggressive politics that the then racist regime in South Africa brought to its neighboring countries. The law prohibits anyone from publishing information without prior permission, and prohibits the media from reporting on the country’s military.

In May 2006, an outbreak of infectious foot-and-mouth disease was identified in the country’s southwest, the most important area for beef production. The losses due to suspended exports, slaughterhouses and slaughter of sick animals increased to many millions of US $ and even threatened the country’s meat industry with closure. 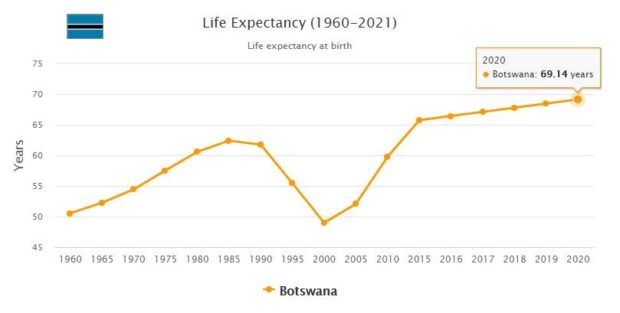