The archipelago is one of the few Atlantic madreporic formations, with about 700 islands (of which only 20 are inhabited), islets and rocks lined up for over 1000 km in length with a NW-SE direction. The islands rise above two long underwater banks (Little Bahamas bank and Great Bahamas bank) which are divided from the Florida peninsula by the Strait of Florida, and from Cuba by the channel of Bahamas, and are essentially organogenic (coral limestones). One distinguishes a northern grouping (Grande Bahamas, Abaco island), which the channel Providence divides by a second central grouping. Part of the archipelago lies on a vast S-shaped reef (Eleuthera, New Providence, Andros, Exuma, Cat, Long Island); further to the SE are the other islands (Acklins, Mayaguana, Grande and Piccola Inagua).

Given the permeability of the rock, there are no rivers; in the inhabited islands there are numerous wells. The climate is mild all year round (average summer over 30 ° C, winter about 20 ° C) and moderate rainfall (1300 mm per year); frequent cyclones.

When Columbus first landed in the New World on October 12, 1492, this happened in the Bahamas. He called the island of San Salvador. The Arawak Indians, who populated the islands, were soon exterminated or deported by the Spaniards. When the islands were laid under the British colony of Carolina in today’s United States in 1629, they had been uninhabited for more than 100 years.

British pirates, smugglers, lawless and persecuted left their mark on the islands. During the American liberation war, many loyalists fled with their slaves to the islands and helped to establish very conservative traditions. Citizens supported the southern states of the American Civil War. During the prohibition period (1920–33), the Bahamas became an important center for alcohol smuggling, and this tradition has been maintained just as the islands are today the most important transit site for drug smuggling to the United States. See abbreviationfinder for geography, history, society, politics, and economy of Bahamas. Since World War II, tourism has been by far the most important industry, and it employs about 60 percent of the population. The geographical proximity to Florida has made the islands an easy vacation destination for Americans and for short cruise cruises. An ever-increasing number of refugees from Haiti have left their mark on the Bahamas and have led to social unrest. 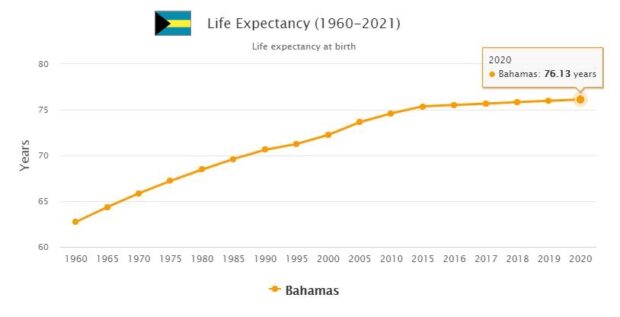 As a British colony, the Bahamas did not have much benefit, but in 1841 got its own legislative assembly. In 1964, the islands gained internal self-government and eventually independence in 1973. Lynden O. Pindling was a leading politician in the period 1967–91 as leader of the Progressive Liberal Party (PLP). The 1991 election was won by the opposition Free National Movement (FNM) with Hubert Ingraham as prime minister. The Bahamas is highly dependent on the United States, and the government is constantly accused of corruption and close cooperation with Colombian cocaine cartels.

Ingraham was re-elected in 1997, and the FNM ruled a new term, but suffered a crushing electoral defeat in 2002 when the PLP gained 29 of the 40 seats in the National Assembly and political veteran Perry Christie became new prime minister. Christie won on a program to promote economic growth by stimulating foreign investors and fighting corruption and other crime as well as illegal immigration from neighboring countries. A challenge for any government is also to get a better balance between regions and industries, after a long period of strong centralization and increasing dependence on one in many ways vulnerable tourism. Around the turn of the century, the country’s banking system managed to get rid of the stamp “doubtful” on the list of the international regulatory body. International protests aroused when the Bahamas reintroduced the death penalty towards the end of the 1990s and the first death sentences were executed.